I have a patron on Patreon who is in the Jewish child lineage of Iron Age haplogroup R1a-CTS6 from Iran known as R-Y2619.

There are 87 samples in this lineage on the YFull tree, with many successive branching points in their phylogeny starting from their MRCA who lived about 1200 years ago. However there are two factors that make it nearly impossible for me to do any meaningful analysis of where this lineage likely originated:

So instead I will analyze the distribution of the parent lineage R1a-CTS6, which is quite interesting.

Iran is relatively undersampled in DNA testing. On the YFull tree there were only 70 samples at the last update.

You can check the different relative sampling rates on this map that I update after every YFull update:

Iran is sampled even less per capita than its neighbors Pakistan and Afghanistan.

Despite having one of the lowest testing rates of the region, three of the four child lineages of R1a-CTS6 are found in Iran, either Kerman or West Azerbaijan province. I count the basal sample as the fourth branch. Even though he isn't recognized with a distinct SNP name on the YFull tree, this man is a fourth lineage.

This is quite strong circumstantial evidence pointing to an origin of R1a-CTS6 in Iran 800 BC.

Interestingly if you go one more step up the tree to R1a-F1345 you find men in China who are Sarikoli speakers, a member of the Pamir subgroup of the Southeastern Iranian languages spoken by Tajiks in western Xinjiang province. So the link to Iranian language speakers persists up the tree, even if there are some descendants who have since adopted other languages like Abaza or Karachay-Balkar.

To those who are following the ancient samples this shouldn't come as a huge surprise because some lineages of R1a have been found in Corded Ware culture in Bronze Age Europe and in the successor cultures found further east in the Urals, some of which later migrated into South and Southwest Asia as chariot-driving Proto-Indo-Iranians. To learn more about the archaeological and linguistic evidence of these migrations I recommend David Anthony's book, though there may be more up to date material on this topic available. Feel free to suggest any material in the comments.

Interestingly, the Y Heatmap for R1a-CTS6 shows a higher relative frequency of this lineage in eastern Europe than it does in Iran. This is due to a founder effect of the Jewish lineage.

All of the samples from eastern Europe descend from men who descended from just one man who lived about 1200 years ago. So while the relative frequency is (or was until the mid 20th century) higher in eastern Europe, the actual origin is most likely Iran because three of the four older branches are found there. 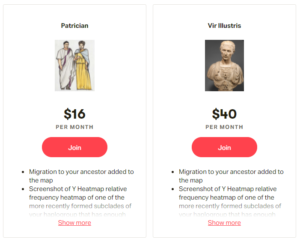 If you would like to commission me to write a research article on your haplogroup you can sign up for the Patrician tier on my PhyloGeographer Patreon.

Vir Illustris tier includes this service along with one hour direct phone contact per month of Y-DNA consulting. For more consulting contact me directly by email, hunterprovyn at gmail dot com.