For background information, you can check it out.

At that time, to an objective observer, all signs (ancient samples and diversity) pointed to an origin in or near the Levant for J2b-M205 MRCA which YFull estimated to have lived 3700 BC.

The deeper origin before the TMRCA lived is hard to answer conclusively given lack of ancient samples and holes in geographic testing, but the oldest J2b samples are from western Iran.

Now I'll describe a few interesting updates to J2b-M205 research that I see on the YFull tree - https://www.yfull.com/tree/J-M205/.

Interestingly FTDNA doesn't show this split, though they usually use the same ancient samples that YFull has and generally agree on phylogeny, if they have different methodology of which SNPs to accept. I don't think they publish which ancient samples they use and they don't indicate it on the tree so it's kind of a black box.

Feel free to comment if you have analyzed the BAM yourself, I have not.

So there are two interesting takeaways here:

Some misguided researchers who have been attempting to swim up a waterfall by ignoring the ancient samples and diversity of the samples in the Levant have pointed at this formerly basal J-PF7321 sample from the Ukraine as somehow casting doubt on an origin in or near the Levant.

We should always keep in mind that a single basal sample is not proof of origin. You need several samples from near the same place from an older branching point to have good circumstantial evidence of origin. The basal sample's ancestor may have migrated to his paper trail origin any time in the preceding recent history.

So in this case with the Ukrainian, J2b-M205 reality finally sets in as we find that he is related to a guy from Syria from a common ancestor who likely lived in the later Iron Age. I'm extrapolating a date a few centuries BC because they have a few less SNPs than Sicily-Yemen sibling J-FT45018 with estimated TMRCA 2000 ybp.

J2b-M205 has a very different ancient and modern distribution than other lineages of J2b, such as J2b-L283 and J2b-Z2432. Each of these lineages, which are 10,000 or more years distantly related to each other, must be analyzed in its own right based on its own samples, rather than repeatedly trying to hammer a square peg into a round hole. 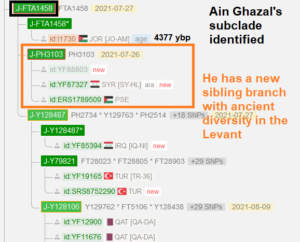 Significantly, this new subclade J-PH3103 so far has exclusively Levant geocodes - Syria and Palestine, not far from Jordan. The new sample has no geocode yet.

If this lineage is really defined by just one SNP, PH3103, it means it would be about 5000 years old. We'll have to check after YFull completes the update.

The most likely origin of J-FTA1458 was the Levant because:

Of the 119 samples on the YFull tree there is not a single lineage consisting of more than one person where all people trace descent to Europe that predates a Roman- or Phoenician-mediated migration time frame.

Next going down the tree, J-BY40909 has a deep phylogeny almost exclusively found in Palestine and Arabia stretching back to 2400 BC. It has just one great-great-grandchild lineage found in Europe (Iberia), Y22523, with MRCA who lived just 1150 years ago.

Just keep going down the tree and you see the same pattern.

In my old article I mention the smoking gun 3DRIF who is J2b-M205 found in Roman era York with autosomal DNA from the Middle East.

So we find that J2b-M205 is an examplar haplogroup demonstrating the mobility of lineages from the Eastern Mediterranean to Europe as a result of Roman and/or Phoenician-mediated migration, demonstrated by the 2019 study Ancient Rome: A Genetic Crossroads of Europe and the Mediterranean