Several months back I found that a Bashkir in the Bashkortostan Project on FTDNA was likely positive for the rarer lineage of J2b-Z2432 known as J-Y28235>Y28237. 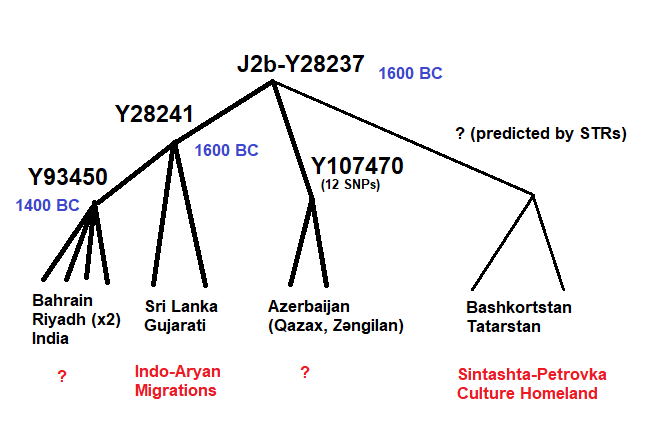 J-Y28235>Y28237, based on its later TMRCA and distribution, does not appear to have entered South Asia with agriculturalists as sibling J-Z2449 appears to have by 5500 BC.

However one of its children, J-Y28237>Y28241, appears to have migrated to South Asia by 1600 BC - much, much later. By the way, this coincides with when Indo-Aryan languages entered South Asia, which I'll get to later. This is the simplest way to explain the presence of Sri Lankan and Gujarati basal samples in this subclade, both relatively undersampled regions, who are so distantly related.

Perhaps the downstream samples in J-Y93450 that contain one Bahraini, 2 Riyadhi and one Indian are indicative of a single ancestor who migrated west from South Asia along the Persian Gulf in 1400 BC, siring all three Persian Gulf samples' ancestors there or it is the result of coincidental separate migrations to a more highly sampled region. I'm leaning toward the former because of the relatively tight geographic distribution between Riyadh and Bahrain. More data is required to be certain.

In the last few months, two men tracing descent to Qazax and Zangilan, Azerbaijan, have tested and are currently shown to share 12 SNPs downstream of J-Y28237 on the YFull tree live view of v9.01. One of these men traces descent to Panah Ali Khan, born 1693 in Sarijali, today Azerbaijan, then Safavid Empire. He is of the Sarijali branch of the Turkic clan of Javanshir.

The ancestry of this man is quite complicated and I'll wait for more info from the researchers involved to elaborate, once we get an estimate from YFull when their TMRCA lived. This will help put the origin theories into perspective.

While several of these lineages now speak Turkic languages, it's important to understand that in 1600 BC, the Turkic language speakers were living in Inner Asia and they didn't migrate westward until after 500 AD. We have no ancient J2b from Inner Asia. So the Turkic speakers in our haplogroup, in every case, ultimately descend from men who were not Turkic speakers. If the Huns were Turks then maybe a few hundred years earlier than this.

If the J-Y28241 migrations to South Asia represent the movement of Indo-Aryan speakers around 1600 BC, then the presence of relatives currently living Bashkortostan and Tatarstan could be interpreted as remnants from the Sintashta-Petrovka culture which inhabited the area and is considered the homeland of the Indo-Iranian language family.

According to some archaeologists, the people who would become the Indo-Aryan language family speakers migrated south to the Bactria-Margiana Archaeological Complex and there acquired various material, cultural and linguistic properties that are found in later Indo-Aryan cultures/languages.

To my knowledge no J2b-Z2432 has been found in ancient Sintashta sites. R1a has. The following two paragraphs from Sintasha article on Wikipedia.

Allentoft 2015, published in Nature, the remains of four individuals ascribed to the Sintastha culture were analyzed. One male carried haplogroup R1a and J1c1b1a (mtDNA), while the other carried R1a1a1b and J2b1a2a (mtDNA).  The study found a close autosomal genetic relationship between peoples of Corded Ware culture and Sintashta culture, which "suggests similar genetic sources of the two," and may imply that "the Sintashta derives directly from an eastward migration of Corded Ware peoples."

Sintashta individuals and Corded Ware individuals both had a relatively higher ancestry proportion derived from the Central Europe, and both differed markedly in such ancestry from the population of the Yamnaya Culture and most individuals of the Poltavka Culture that preceded Sintashta in the same geographic region.

So if any J2b-Z2432>Y28235>Y28237 were actually present in Sintashta males, it would seem to have been a small minority, one that did not take part in a migration from Central Europe, because it hasn't been found in Europe. It would have been a substrate of the original population that was living NE of the Caspian Sea before the arrival of R1a dominant Corded Ware groups from further west.

There has already been found J2b-Z2432 from the BMAC, sample I4157 from Bustan, Uzbekistan dating to 1600-1300 BC. I didn't analyze the BAM but I heard it was too low resolution to know anything beyond J2b-Z2432. As BMAC was considered to originally be populated by agriculturalists, it would not be surprising if this J2b-Z2432 was downstream of prolific South Asian agriculturalists J2b-Z2432>Z2433>Z2449.

We would need more samples to know for sure, but a theoretical origin of J2b-Y28237 to the NE of the Caspian Sea 1600 BC shouldn't seem impossible given that sibling J2b-Z2433 appears to have been living south of the Caspian 5500 BC.

We'll have more genetic information to guide these theories if we can upgrade the Bashkir and the sample from Tatarstan to NGS and get analyzed on the YFull tree.

Today I've created the J2b-Z2432 Research Fund for this purpose. The first two Big Y / WGS tests will be for these two men, if we get their consent. The Bashkir will need to be a Big Y because he's unable to be found to obtain another sample, but I have consent from his administrator. Perhaps we'll have more flexibility with the Tatarstan sample to fund a more affordable WGS test.