E-L674 has two child lineages. The most recent common ancestor of both lineages lived about 1700 years ago. 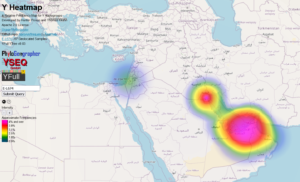 Each child lineage has a distinctive modern geographic distribution that indicates with relative confidence that:

The next interesting question is where were their more distant ancestors had been living during the long bottleneck of E-L674 that started about 5400 BC and ended around 300 AD (YFull estimates)?

The YFull tree has no ancient samples so we have to look at the distribution of their next closest relatives.

Going one level up the tree you can see their distant cousins, E-V2418, one man from Jordan and one man from Iran. This is too few data points that are very distantly related and not geographically consistent enough to conclusively demonstrate whether the MRCA (most recent common ancestor) of E-L674 had been living in the Levant vs Gulf Arabia.

We can however infer that the MRCA of E-L674 may have been somewhat more likely to be living near Gulf Arabia vs the southern Levant because the lineage in the Gulf was established within just 250 years after the E-L674 MRCA lived. On the other hand, the lineage in the southern Levant was established 700 years after the E-L674 MRCA lived.

All things being equal, we assume that lineages that are older are more likely to be indicative of the ancient origin, because we consider the unknown movements to be random.