So far no ancient samples have been found from men of this 10,000 year long bottleneck. Until they are found, we have only the modern distribution and several ancient fully formed J-M205 samples as data points. This can help us determine at least where the man at the end of the bottleneck was living 3700 BC. 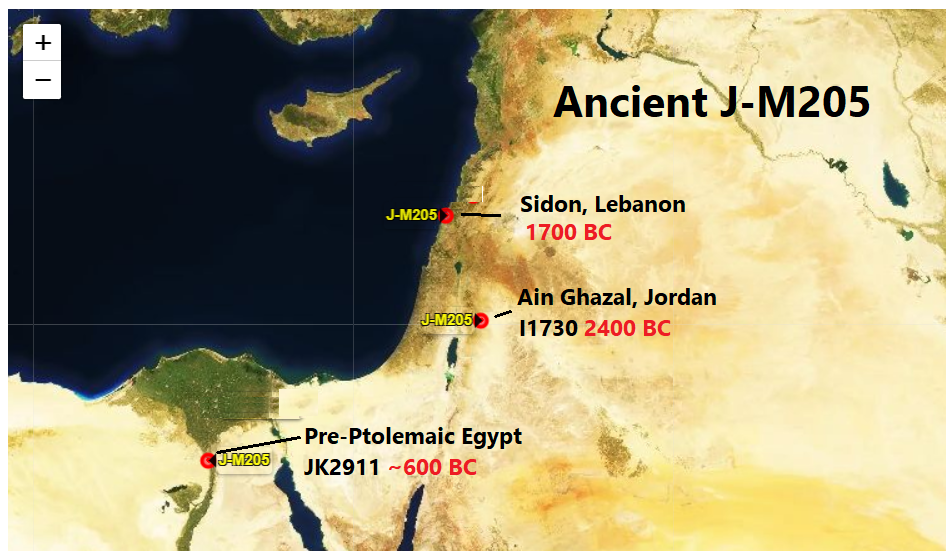 The oldest J-M205 sample was found at the site of Ain Ghazal, modern Jordan. It is dated to 2400 BC, which is 1300 years after the J-M205 most recent common ancestor lived. Later samples were found in Bronze Age Sidon and Pre-Ptolemaic Egypt (this sample was from the interesting paper Ancient Egyptian mummy genomes suggest an increase of Sub-Saharan African ancestry in post-Roman periods).

The greatest diversity of J-M205 is found in the South Levant, Arabia and Egypt. In fact, successive diversification in these areas occurred between 3700-3600 BC in J-M205>PF7321>CTS1969>YP51>YP13>Y101509. These six successive subclades estimated to have formed within just one hundred years could represent the offspring of a dynasty that ruled a city state of the South Levant or in the surrounding area.

While other lineages of J-M205 are also found in the Arabian Peninsula, J-Y45477 has the most compelling evidence for having originated the furthest back in time.

J-Y177451 is represented by three men from Riyadh with common ancestor who lived 1500 BC.

J-Y128176 is found only in Hadramaut, Yemen with common ancestor who lived 325 years ago.

J-Y45076 is found only in Hadramaut, Soqotra, Zufar (Oman) and Jizan (Saudi Arabia). It's worth noting that Zufar and Jizan are right on the modern Yemeni border. Given the geographic consistency of these lineages, it seems reasonable to conclude that their most recent common ancestor was living in Zufar or Hadramaut in 1000 BC. This date is the YFull estimate for when their most recent common ancestor lived.

Note: We do not know if this Egyptian man's ancestor actually had migrated to Egypt by 3300 BC - though it is possible. To be more sure, short of an ancient sample from this period, another modern Egyptian would need to be found whose YFull analysis results in an exclusively Egyptian lineage with most recent common ancestor estimated to have lived sometime near 3300 BC.

So while we don't know for sure that this Egyptian man's ancestors were in Egypt 3300 BC, it is a possibility. We do know that J-M205 has been found in an ancient Egyptian context before (600 BC). Given this, let's look at what was happening in Egypt at this time.

Shortly after 3600 BC Egyptian society began to grow and advance rapidly toward refined civilization. A new and distinctive pottery, which was related to the pottery in the Southern Levant, appeared during this time. Extensive use of copper became common during this time. The Mesopotamian process of sun-dried bricks, and architectural building principles—including the use of the arch and recessed walls for decorative effect—became popular during this time - Wikipedia, Early Dynastic Period of Egypt

It is interesting that the period marking the beginning of rapid technological and cultural advances in Egypt coincides with the diversification of most J-M205. The timing of J-Y45447's arrival in Hadramaut / Zufar by 3300 BC is also interesting because this is just 150-200 years before the rule of Narmer who, according to history, was a king of Upper Egypt who then conquered Lower Egypt to first unify the country.

Most interestingly, the Egyptian sample who is J-Y47134* (negative for known subclades) traces descent to Fayyum which is just several miles west from the type site Gerzeh.

Distinctly foreign objects and art forms entered Egypt during this period [Gerzeh culture], indicating contacts with several parts of Asia. Scientific analysis of ancient wine jars in Abydos has shown some there was some high-volume wine trade with the levant during this period. Objects such as the Gebel el-Arak knife handle, which has patently Mesopotamian relief carvings on it, have been found in Egypt, and the silver which appears in this period can only have been obtained from Asia Minor. - Wikipedia, Gerzeh culture

The route of this trade is difficult to determine, but contact with Canaan does not predate the early dynastic, so it is usually assumed to have been by water. During the time when the Dynastic Race Theory was still popular, it was theorized that Uruk sailors circumnavigated Arabia, but a Mediterranean route, probably by middlemen through Byblos, is more likely, as evidenced by the presence of Byblian objects in Egypt. - Wikipedia, Prehistoric Egypt

The fact that so many Gerzean sites are at the mouths of wadis which lead to the Red Sea may indicate some amount of trade via the Red Sea (though Byblian trade potentially could have crossed the Sinai and then taken to the Red Sea). Also, it is considered unlikely that something as complicated as recessed panel architecture could have worked its way into Egypt by proxy, and at least a small contingent of migrants is often suspected. - Wikipedia, Prehistoric Egypt

Note, I am not an Egyptologist or archaeologist.

There isn't enough circumstantial evidence based on the samples on YFull below J-Y47134 to conclude that their common ancestor was likely living in Egypt in 3300 BC. So far the oldest ancient J-M205 sample found in Egypt dates to 600 BC.

More upstream diversity or older ancient samples would need to be found in Egypt to suggest an Egyptian origin of J-Y45447. At present there is just one other Egyptian in sibling J-Y134194. This branch consists of an Egyptian from Asyut and a northern Lebanese man whose common ancestor lived 1100 BC.

So J-Y45447 may have migrated to South Arabia by a different route, from the Levant or Mesopotamia. The Gerzeh culture's links to Mesopotamia could be a clue to a Mesopotamian origin - this is an undersampled region. The other branches of J-M205 are scattered too widely for me to attempt to go any further at this time.

Balkan Presence of one lineage of J-M205

Based on the NGS samples on YFull, there is only one subclade with Balkan presence, J-Y22059. The common ancestor of these men lived about 1000 years ago. This man's descendants trace descent to Bosnia, Herzegovina, Serbia and Albania, though there may be STR matches of these men found elsewhere.

Given that its three siblings, J-FT58361, J-Y128487, and a basal Palestinian all trace descent to the Near East, that J-FT58361's Near Eastern most recent common ancestor lived 1800 BC, and given the upstream diversity in the Near East, it makes the most sense that the ancestors of J-Y22059 migrated to the Balkans from the Near East some time before 1000 years ago.

This subclade is very interesting because it has no representation in the Near East. It's most recent common ancestor lived 1250 years ago.

Given the overwhelming upstream diversity in the Near East, I think it makes the most sense to view this subclade as the descendant of a Roman Era migrant from the Near East to NW Europe.

In fact there is a precedent for just such a migration in J-M205 already in 3DRIF-26, exogenous Roman era York J-M205 and likely Middle Easterner.

The English origin sample of J-Y101509, with a TMRCA of 3600 with a man of Palestinian descent, could be another instance of such Roman-mediated migration to England. His surname is Pople he wanted me to share, and is eager to find matches to help explain how his lineage got to England.

A man of Jewish Indian descent who is J-M205 has recently purchased an NGS test. I could not reliably predict his haplogroup on the basis of STRs. Since no other J-M205 are from anywhere near India, it makes the most sense to view this man, especially given the Jewish context, as a migrant from a Near Eastern Jewish population.

It's worth noting that some J-M205 samples have been found in Armenia/Armenians and that one of the YFull samples is from Kars, Turkey which had historically been Armenia. Given the lack of other samples from or near the South Caucasus this appears to have been a migration that took place no earlier than 2700 BC and likely after 2000 BC which is when the most recent common ancestor of otherwise non-Armenian Y128487 lived.

Since the other J-Y12847 live in Kuwait, Saudi and Qatar it would be very interesting if an additional Armenian sample were found that could help us determine if this one branch of the lineage may have migrated to Armenia during a historical period associated with conquest from the South.

I would love to theorize more about where the J-M205 ancestor may have lived and what his lifestyle may have been like. Anyone wishing to purchase me a book about the Copper Age in the Levant / Arabia may please contact me at hunterprovyn at gmail dot com.