The following information is from a conversation I had January 20, 2020 with Ted Kandell of Open Genomes. I then made some edits and added some information about additional YFull samples.

Looking at the distribution of G-Y12975 on YFull one may assume an Eastern European origin for the ancestor who lived approximately 1050 years ago.
However, it's important to understand that Jews were not in Poland-Lithuania before 1350.
Note that the tMRCA of 970 CE is just before the migration of Italian Jews to the Rhineland, in 987, under the Emperor Otto III. This is well documented, in both Jewish and non-Jewish sources. They originated in Southern Italy (Bari and Oria) and around Rome.
The Lombard-dominated Byzantine Catepanate of Italy was a refugium for Jews during the Dark Ages. Jews were progressively expelled from areas after the Muslim conquests starting in 636 CE.

Jews before 711 were really just in Southern Italy and around Marseille.

712 Jews were also expelled from the Byzantine Empire

Jews didn't return to Spain until 711, from North Africa.
Narbonne from 719-749 was a haven for Jews, the "western end" of the Silk Route, which went through the Ummayad Caliphate straight to India and Central Asia.
So the dispersal of G-Y12975 fits almost exactly with the dispersal from Southern and Central Italy of the Jews in 987.
There are clear signs that there were families in Provence in the High Middle Ages around 1150 and earlier, and in Italy before the Black Death. Also, Sicily.
There is a sample in YFull that is from a non-Jewish family that has traditions of being from Sicilian Jews. They were only in Germany for a single generation, and had previously settled in Berne Canton, Switzerland.
They have a tMRCA with a Polish Jew at around 1625. They were not from Poland nor were they ever in Eastern Europe.
Jews were progressively expelled from Sicily in 1493, Calabria in 1512, Naples in 1540, most of the Papal States in 1556, and ghettoized in Venice in 1580, finally being expelled from Mantua in 1618.
After 1618 it is estimated that there were only about 3000 Jews left in all of Italy, in a few ghettos.
Jews were expelled from Prague in 1612, Frankfurt in 1618 ... and generally left Germany during the Thirty Years War, when things became very dangerous.

Everywhere from Burgundy to the Low Countries to Switzerland to the entire Holy Roman Empire to Prague. All in these areas were murdered or moved as refugees to Italy. 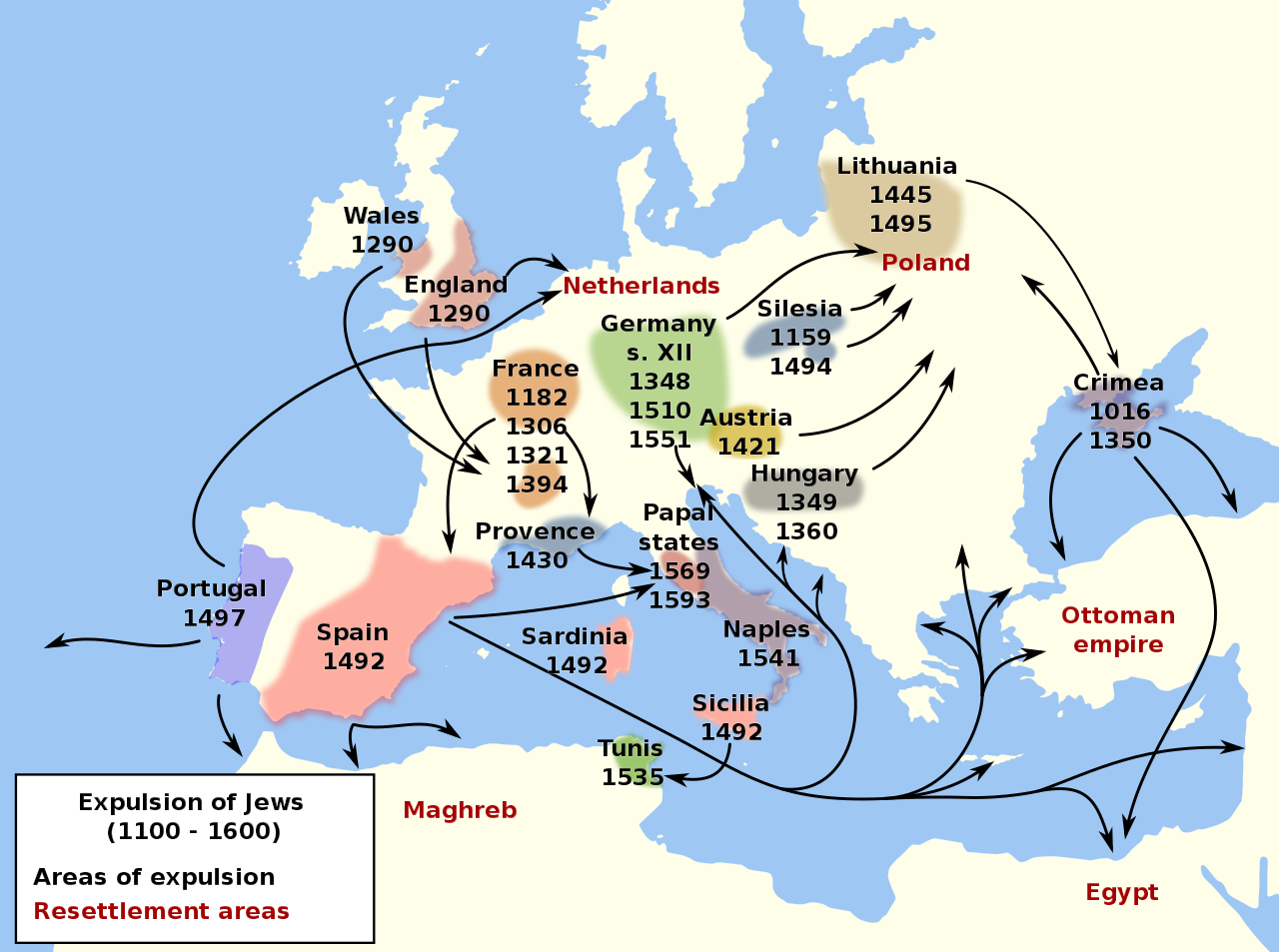 Suddenly, Jews appear in Lviv in Western Ukraine in 1350. This was part of the Polish-Lithuanian Commonwealth. Also Grodno in the Grand Duchy of Lithuania.
We have one family that was expelled from Heilprin, Germany in 1542, and ended up in Ukraine, but it seems some remained in Germany.
Dated to the 1580s, there is the Volterra family from Ancona, but they appear in several haplogroups.
It may be that they are pre-Black Death Italian Jews from Fabriano in Ancona Province, who later ended up in Bologna in after 1350.
This is aside from the non-Jewish Francisco family from Berne from before 1680, supposedly, but not actually, "Mennonites". They have extremely clear stories of being "Sicilian Jews". Separate lineages from an ancestor born in 1680 who immigrated to Pennsylvania in 1709 tell the exact same story. There is the Bloch family from the 1680s or earlier in Alsace. The Alsatian Jews originated in Germany, not Poland.
Jews didn't really go to Sicily until the Muslim Conquest. Byzantine Sicily didn't allow Jews. But at the time of the Muslim conquest, Jews from Apulia went there. This is documented.
Later, after the expulsion from Provence in 1306 / 1322, Jews also migrated to Sicily. This was after major massacres during a famine brought about by climate change.
It seems that some Provencal Jews also went to Spain, and there is a bit of evidence that some Jews in G-Y12975 from Portugal, perhaps, ended up in Eastern Europe. At least the Gedalia family from Salonika and Sarajevo.

Then, there is a clade of G-Y12975 "Mestizos [Admixed]" from Merida, Yucatan, Mexico who are somewhat divergent from each other (even at 17 STRs), both in YHRD and in the old SMGF.
We can guarantee that they were never in Poland.
Merida was founded by Conquistadors in 1542. Based on their divergence, it seems to date to that time. One individual has the name "Canche", which is a Mayan name, but the line ends in 1870.

The likely scenario is a migration and settlement in Italy during the Roman deportation of Jews in the Jewish Wars. We can't prove it though, since there are no G-Y12975s surviving in the Near East.
We can be sure that every G-Y12975 is either Jewish, of known Jewish origin, or of "unknown" paternal origin.

We have a remarkable radiation of G-Y12975 at 950 CE, into SEVEN parallel subclades.
This shows multiple divergent migrations and some remaining in Italy. Basically to the Rhineland and Provence.

That's just admixture. "Eskimo" custom of "hospitality", OR Russian Jewish "cantonists" in Russian Alaska. Many Aleuts are admixed with "Russians". "Cantonists" were child Jewish draftees into the Russian army from 1829 for 25 years of service.

Also a Khanty from Uralic Siberia. Again, admixture with Russian draftees who deserted, or traders.

There were many Jews who ended up in Manchuria too, but the Liaoning G-M377 is a Han Chinese! Not even a Hui Muslim. But it's not G-Y12975.
There is one G-Y12975 from "Marmara" around Istanbul, from a hospital. There are Ashkenazi descendants in Istanbul today, I know of one in G-Y12975 who is Jewish.
He went from Ukraine to Palestine in the 19th century, then to the Ottoman Capital. It's an anonymous sample, so it may very well or is likely Ashkenazi.

Deeper Origins of G-Y12975 Before End of Bottleneck

Now, G-Y12975 has a tMRCA with G-M3124 at 2700 BCE, the Early Bronze Age.
Their common origin was absolutely not in Italy, given that G-M3124 is almost all in Afghanistan and Pakistan, in the Hindu Kush region, with an internal tMRCA of 1300 BCE. I mean at least with the one Sicilian family.
The Ashkenazi haplotypes bear some resemblance to the Pamiris from Tajikistan, but it seems more likely that those are a very early branch of G-M3124.
This article, also based on notes from the same conversation with Ted Kandell, details the diversity of G-Y12975's next closest relatives:
G-M377 Diversity Across Eurasia and the Americas

More information on this lineage at JewishDNA.net.