A man buried in the Via Salaria Necropolis, north of Rome, has been found to be J-Z631, according to the study Ancient Rome: A genetic crossroads of Europe and the Mediterranean published today in Science.

Sample R116 was estimated by direct radio carbon dating to have been buried between 0-200 CE. However given that this necropolis was closed by Trajan around 110 CE, this man was probably born in the first century.

The raw data has not yet been released. When it is, we may be able to determine a more specific subclade below Z631. This man's mother had mitochondrial haplogroup U3a2, which according to Eupedia "found in Yemen, Italy, Switzerland and Britain / found in the Kura-Araxes culture (Copper Age Armenia)".

From the abstract: "During the Imperial period, Rome’s population received net immigration from the Near East, followed by an increase in genetic contributions from Europe. These ancestry shifts mirrored the geopolitical affiliations of Rome and were accompanied by marked interindividual diversity, reflecting gene flow from across the Mediterranean, Europe, and North Africa."

Because of the political and economic importance of Rome, many people moved to the city from different parts of the empire. The study concluded his cultural affiliation was "Imperial Roman" so until any autosomal DNA or other information is analyzed which would imply a non-Italian origin, we should assume this man was indigenous. Knowing the percentage of residents of the city of Rome that came from Celtic regions would be useful, though I'm sure it was much less than half, which is why I'm assuming this man was an indigenous Roman.

According to the YFull estimates, this Roman sample was born about 800 years after the Z631 most recent common ancestor. While male lineages are capable of migrating hundreds or thousands of years in this time, it should be noted that Z631's next closest relative is a Z8421(xZ631) so far found in only one man who is from Roccascalegna in the province of Chieti, Italy. This is a 227 kilometer walk away from Rome and the common ancestor of these men lived 1600 BC.

Previously I had favored a Celtic theory for the child lineage Z1043 over the prevailing Balkanites-recruited-as-Roman-soldiers theory due to:

The Celtic theory became complicated by the discovery last year of two Albanians from Vlorë who occupy different subclades of Z631 which formed 800 BC, Y155546 and Y144394. These two subclades are hard to understand because they are also widely distributed - the former found in a "northwest European" and the latter in a Silesian.

We also have a man whose ancestors came from Serbia in Z1043>BY38004, though his surname is German.

There is now ancient Z631 only in Italy, upstream Z8421 only in Italy and two subclades of Z631 found in Albania. This makes a Balkan or Italian origin of Z8421 and Z631 seem most likely. Perhaps an Albanian origin of Z8421 is more likely than two independent migrations from Italy to the exact location of Vlorë in child lineage Z631. If Z8421(xZ631) is ever found in the Balkans, this would strengthen the argument.

While Balkan diversity of Z1043 has grown recently, the preponderance of basal Z1043 samples and subclades are north of the Alps. 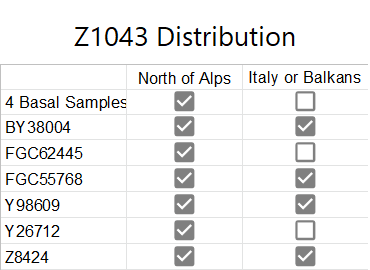 This preponderance north of the Alps could be caused by sampling bias. Higher population levels due to early industrialization and current wealth and interest to test are found north of the Alps versus in the Balkans. Given this bias, the fact that Italians and/or Balkanites have been found in four of six identified Z1043 subclades might be indicative of an Italian/Balkan origin of Z1043.

It is exciting that we are finally making progress into determining the origin of Z631 by finding ancient DNA. After we learn the terminal subclade we will have more information to work with. We may decide to target Italian / Balkan men for J-M12 SNP panel testing which may reveal Italian / Balkan presence in the remaining J-Z1043 lineages.