Let me first state that no ancient DNA sample has been found confirming that a Z1043 man was a continental Celt. The following theory is based almost entirely on where living people of various subclades of Z1043 trace their descent. 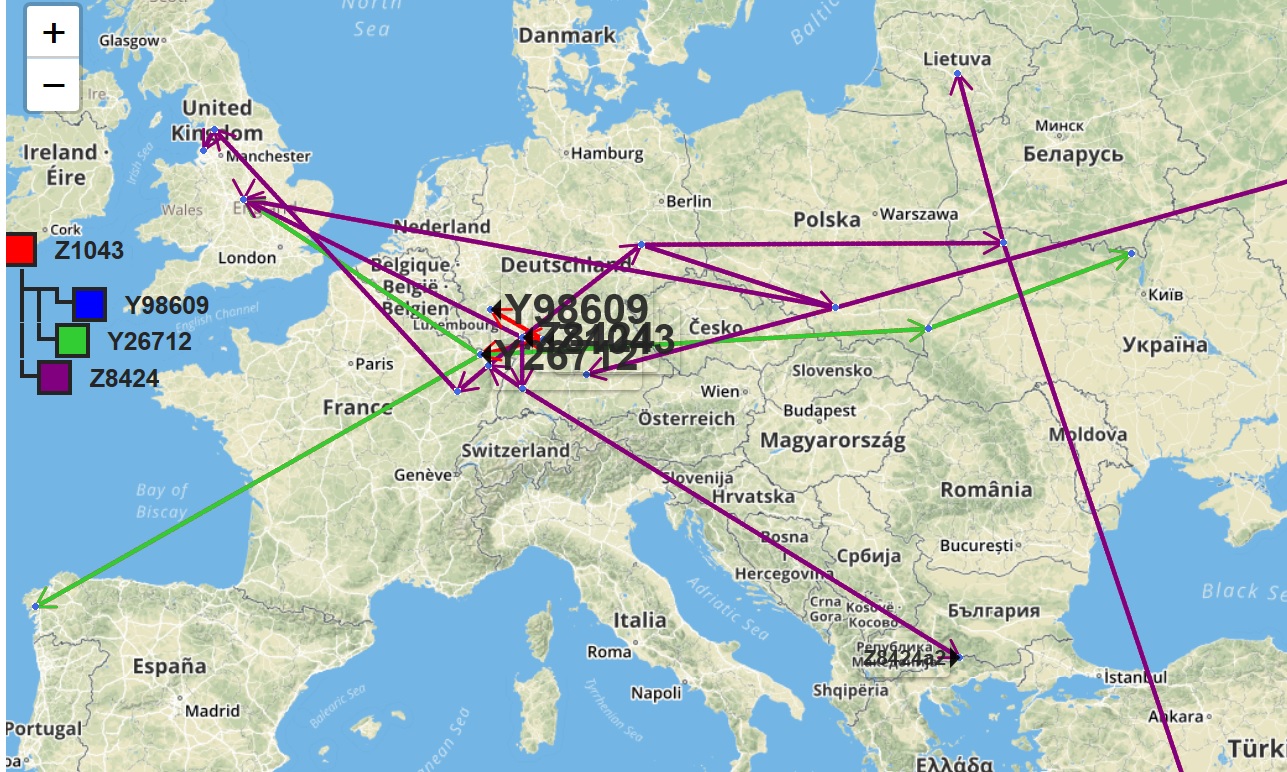 Many of the more populous J-M241>L283 subclades in Europe appear to have radiated out from the Balkans between the Bronze or Iron Ages. The only one with enough data for me to assume may have been associated with the Celtic migrations is Z1043. The estimated formation date of this clade is 700 BC and there were 5 subsequent lineages formed in rapid succession that are found over a wide area of Europe but appear centered around SW Germany / E France / Switzerland. Many subclades are also found in England, Iberia, Eastern Europe and the Balkans, areas known to have been invaded by Celtic tribes in the Iron Age.

There is very little diversity of Z1043 in Scandinavia. Cross off the Germanic peoples believed to have been living in Scandinavia / N Germany at this time.

Despite a presence in Eastern Europe within three branches, CTS11760, Y12007 and Y26712, all three branches are also found in Germany and England. This makes a Proto-Slavic origin for Z1043 problematic.

Who is left? Celts and Romans appear the main contenders.

I assume Celts rather than Romans because the expansion of Z1043 predates the Roman Empire by 700 years, seems centered clearly north of the Alps, and there are no exclusively Italian subclades (which would be the descendants that stayed behind in Italy, if it were originally a Roman origin). There is an exclusively German subclade, PH1553 (not shown on map) and all of the other subclades show a distribution centered around SW / Central Germany or have individuals living in Germany.

The other subclades of Z631 do not appear Celtic - there are few samples so our picture may change over time, but two subclades having presence in Albania could reflect that the origin of Z631 was in the Balkans. Indeed the oldest J-M241 found in Europe was found in Croatia and not in Italy.

The main alternative theory behind the distribution of J-Z1043 is that the mutation formed in the Balkans and was spread throughout Europe by men who had been recruited by the Roman legions.

This could end up being true but I think the current data makes a Celtic explanation more plausible. This would change if the formation dates are off (end up being later, near Roman Empire expansion) and if we find more Z1043 diversity within Italy rather than Germany.

We are waiting on a test to come in that may establish when the Iberian subclade of CTS11760 formed. Within the Celtic theory, a pre-Roman date for their TMRCA could indicate that this Iberian subclade was founded by Celtiberians.