According to YFull estimate D-Z3660 split 44,600 years ago into two branches. Today one branch, Y34637, is found only on the Andaman Islands. Their sibling M64.1 is found in Japan, especially in Ainu populations. 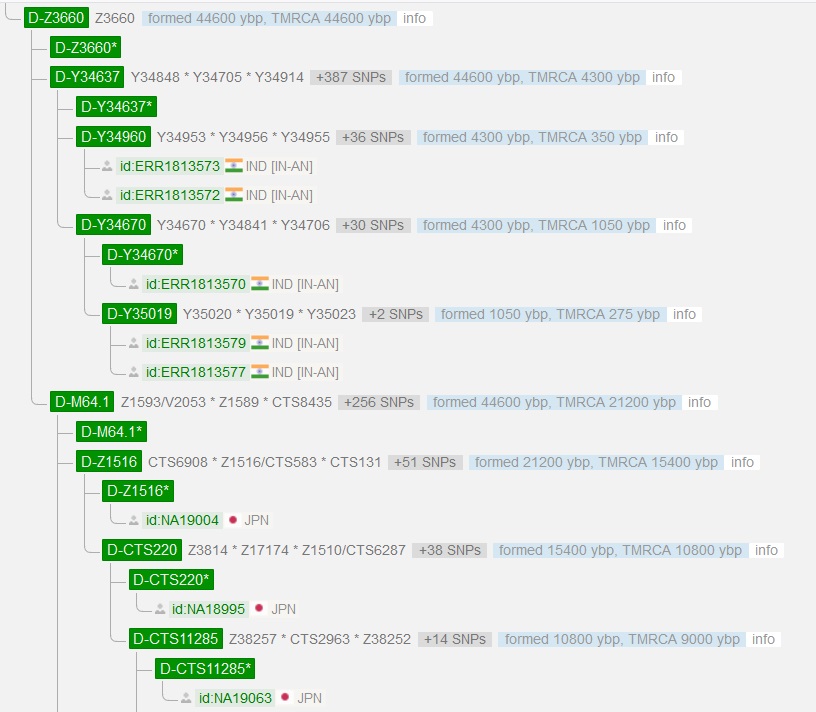 PhyloGeographer currently puts formation of D-Z3660, parent D-CTS11577 and D itself near mainland China and Hainan. This is likely due to minimize distances to D* in Philippines and D-Y15407 in China.

Both of these subclades are survivors of long bottlenecks. The Andamanese all descend from a man who lived 4300 years ago. That is a 40,000 year bottleneck.

According to Chaubey and Endicott (2013), the Andaman Islands were settled less than 26,000 years ago, by people who were not direct descendants of the first migrants out of Africa. They theorize that the first humans to get there crossed a land bridge from Myanmar. If that is correct and if D-Y34637 came with this population, then there may be closely related Z3660 or Y34637 yet to be discovered in Burma. Or they died out.

The Japanese D-M64.1 all descend from a man who lived 21,200 years ago. Notice we don't see any subclades on Hokkaido. It could be that the vast majority of surviving M64.1 lineages are those Jomon who became Japanified on Honshu and other southern islands.

According to Tajima, Hayami et al (2004), the Ainu populations on Hokkaido have higher percentages of M64.1 than elsewhere on the island.

Maybe we see less diversity in Hokkaido because only those lineages that went to northern Honshu would have then traveled on to Hokkaido? Assuming the migration came from the south. The lack of diversity on YFull could also reflect the poorer socioeconomic standard of Ainu in Hokkaido.

Unfortunately for the small population Kuril Ainu who have survived in Russia, the Russians do not consider the Ainu a living ethnic group and they lack the kind of hunting and fishing rights of other recognized groups.