My haplogroup, J2b-L283, has been in the Balkans since the Bronze Age so I decided to read "The Early Medieval Balkans" by John V. A. Fine, Jr. in order to better understand historic events that could have impacted the survival or migrations of male lines.

I just finished reading his analysis of the migrations of the Slavs into the Balkans and decided to look at the distribution of the various children of I2-Y3120, many of which appear to have taken part in these, and other, migrations.

I realize relative frequency heatmaps do not necessarily show the areas of highest diversity, which are more likely to indicate a haplogroup's origin than the relative frequency. However if you are careful to understand founding effects and check the diversity and ancient samples in the tree yourself, this visualization crunches a large amount of data into a meaningful metric that can guide your reasoning.

This man's ancestors went through a rough period where no other siblings survived except his own direct male line ancestors. This started in 1400 BC and ended 200 BC.

If you look at how many SNPs comprise each of his child lineages, you can infer the following:

*These three lines are defined by a single SNP, which may actually have taken several generations to arise

Now lets look at the modern geography of each of these sons' offspring.

It's good that this one comes first on the YFull tree because I think it's the most interesting.

This relatively small lineage comprises over half of all the Greece samples in I2-Y3120 on YFull. This 10 of 18 Greece samples figure does however diminish a little if you ignore founder effects in the last millennium - it becomes 6 of 13. Still, I2-Y18331 is punching well above its weight in Greece relative to the other lineages.

So where were these guys living before they migrated to Greece? Did this location somehow contribute to the destiny of many of these men to migrate to Greece 800 years later?

Interestingly, all of these men who migrated to the Balkans wound up in Greece, Albania or North Macedonia (one guy) or neighboring countries and none became Serbo-Croatian.

There are no relatives living in any other nearby countries to provide an idea of from where they originally came.

The heatmap shows there are a number of samples between Masovia and Belarus. Most of the heat is caused by a founder effect but it is worth noting that the only two Polish samples in this subclade are distantly related to each other (one is basal) and from Masovia.

The other clue is the sample from Ukraine but he didn't indicate from where in the Ukraine he is from.

So I'm not answering this question for now.

But we can consider the theory that I2-Y18331 and/or his sons migrated somewhere, possibly joining or forming a separate political entity, which much later decided to take part in a migration to Greece.

Edit: When I wrote this article I didn't know that child I2-Y23115 from Belarus and neighboring countries was 100% Eastern Ashkenazi. When I have time to process that I'll probably edit this section.

One implication to this is that it seems more likely that the ancestor was living in Greece by approximately 200 BC. In this case we may be looking at Celts that had invaded Greece in 279 BC. The estimate is very close given the error range. Wow, mind blown.

I2-Z17855 is most prevalent in Bulgaria, North Macedonia and part of southern Serbia. There is only a single sample in Greece.

There are several samples from Ukraine and a sample each from the undersampled countries of Romania and Moldova. Poland only has one sample.

This could mean that this son or dynasty of I2-Y3120 had migrated to somewhere around SW Ukraine or Moldova that is indicated in yellow on the map.

I2-Y4460 has highest frequency in the Ukraine.

Interestingly, one child lineage of I2-Y4460 did migrate to Greece. It is called I2-Y70430 and has a TMRCA of 500 AD. Like the guys we looked at earlier who went to Greece, their closest relatives are found in Belarus as well.

This connection between Belarus and Greece could mean:

Now we're looking at the children of the prolific fourth son's dynasty I mentioned in the beginning.

The highest frequency of I2-Y4882 is southern Poland around Krakow, northern Slovakia and eastern Moravia.

His offspring didn't migrate much to the Balkans. There are a few samples in the eastern parts of Germany, one is an ancient sample from Krakauer Berg in Sachsen-Anhalt dating to about 600 years ago.

Five of the six modern Balkanites descend from one man who lived 1250 years ago, I-Y177643. So it's possible that only two descendants of I2-Y4882 migrated to the Balkans.

The highest frequencies of I2-Y5596 are found in an area including Ternopil and Lvov oblasts of Ukraine, Krakow, Moravia, eastern Austria, Slovakia and most of Hungary excepting its eastern border.

There are a few samples from the northern periphery of the former Yugoslavia and a lone Bulgarian.

Five of the Poles in the heatmap descend from just one man who lived 600 years ago - their next closest relative is from Czechia.

There are samples from eastern and northern Germany where we know Polabian Slavs used to live. Except for the Sorbs, Polabian Slavs, such as the Obodrites who lived in Mecklenburg and Holstein, eventually assimilated with the Germans. The Obodrite princes stayed in charge but changed their names to be the House of Mecklenburg.

While there are two distantly related ancient samples from the South Moravia Region that lived 1162 years ago, I think this cannot be the origin because according to historical sources, Slavs didn't come to Moravia until the 6th century. Prior to this there were Germanic and Celtic tribes living there.

So maybe the western Ukraine is a better candidate for the origin of this line. 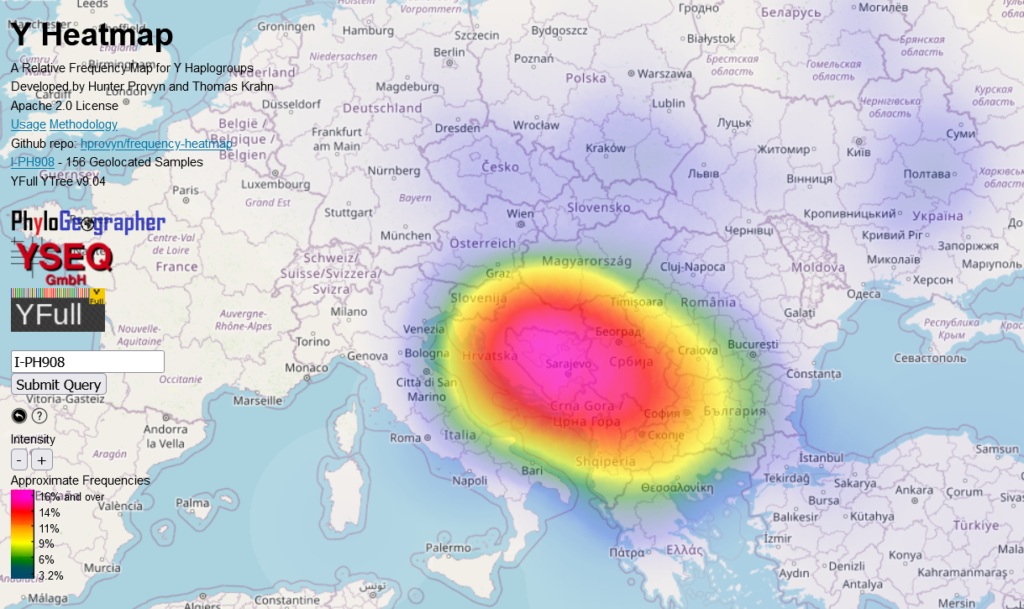 I2-PH908 are most prevalent in Serbia, Croatia and Bosnia and Herzegovina. Their MRCA lived 1700 years ago, which is just a few hundred years before the Slavs migrated to Germany and the Balkans.

Found effects amplify the frequency to be so much greater in the western Balkans vs other Slavic countries.

Discounting the outliers to the east in Russia, it is most prevalent in Ukraine, Slovakia, southeastern Poland and Czechia.

There are no ancient samples on the YFull tree to help us determine the origin.

I think we really need a diversity heatmap to crunch the geolocated samples to get an idea of the possible origin.

One interesting thing I notice is that two of the German samples from regions that were inhabited by Slavs each have a closest relative from the Balkans. The TMRCAs are 1550 and 1350 years ago. So from their homeland, in a space of a few hundred years, these two pairs of relatives each joined different migrating groups that went in completely different directions from one another.

Maybe it would help to analyze each of the major children separately, something I will not do at this time, but someone could commission me through the Patrician tier of PhyloGeographer on Patreon.

I thought it would make sense to consider an alternative explanation.

Given that if you go up a few branches on the YFull tree back to I2-L621, the diversity is around Germany, I think that I2-Y3120 may have begun its 1400 BC bottleneck somewhere in or near Germany.

The migration of this man to the east might have been within the context of the Tumulus Culture, Urnfield Culture or Hallstatt Culture. By 200 BC, if he were living in or near the Slavic homeland I can think of no better explanation than that his male line had already been assimilated into the Slavs or formed as they did.

Goths could also be considered but what are the chances that every single one of these Goths assimilated into Slavs rather than taking part in Gothic invasions of Italy and western Europe. Also there is no genetic connection to Scandinavia.

Maybe one theory why R1a is not as common as I2-Y3120 in the Slavic Balkans is because I2-Y3120 were a group that adopted the language and culture of dominant, mostly R1a original Slavic groups that it was fleeing from.

That's all folks - but maybe you can take it further

These are my own opinions from looking at the data. Others who specialize in this haplogroup's research may have already reached the same conclusions, or different ones.

The goal is to deduce which tribes they belonged to. If researchers feel confident about the geography of a subclade's origin then those with knowledge of ancient tribes can take it to the next step. I'm sure some have already. Hopefully the maps I've linked and some of my observations could be helpful in this next step.

I think we are probably close to understanding where some of these lineages originated. We need more ancient samples, but these days they are rapidly accumulating. We need to test more people from some countries as well.

When we learn anything about one group of ancient Slavs from any branch of science, there is a knock-on effect because it has implications for whoever their closest male line relatives are known to be.