I'm writing this article for one of my Patreon clients who is supporting me in the new Patrician tier. 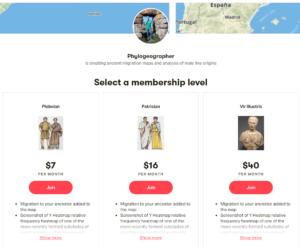 He is in subclade R-FT128338. His surname is Wilson but he doesn't match other Wilsons.

Unfortunately no one who is related to him within 3600 years has a paper trail to a specific location in the Old World. One guy on the FTDNA haplotree related to him about this distantly (we don't know because he didn't do YFull analysis) has indicated Norway and there is another guy on the YFull tree in the same branch, R-BY62794, who has indicated United Kingdom. This is a child lineage of prolific R1b-L21 that migrated to the British Isles in the Bronze Age and displaced 90% of the existing male lines at that time.

Even in a case like this it is still possible to analyze the limited data we do have about his more distant relatives and attempt to make some conclusions.

To find a larger number of relatives that have paper trails to the Old World besides these two guys, we have to go back to the branch known as R-A287.

On the YFull tree we can see this lineage has another child that has been established in Scotland, likely Aryshire, by 750 years ago.

In the case of this lineage it's important to also check the FTDNA haplotree because many of the samples were probably not advised to do the YFull analysis. I always start with the YFull tree because it has TMRCA estimates, more specific regional codes, ancient samples, and linguistic codes, a new feature. All of this information is vital to understanding our male line ancestors origins and is why I recommend people interested to advance the research into their origins to take advantage of the YFull analysis.

On the FTDNA haplotree we see several child lineages below R-A287.

What looks clear is that this lineage did not likely originate in England or Wales. What is less clear based on the small amount of data, is whether the origin was Ireland, Northern Ireland or Scotland.

In the last 4000 years there were plenty of opportunities for migrations between these areas.

I remember having read of the theory that the Dal Riata kingdom, including the western seaboard of Scotland was a Gaelic kingdom that would have originated in Ireland. But on rereading the Wikipedia article it looks like some academics think they may have been speaking Gaelic in that part of Scotland since before the formation of that kingdom simply due to maritime contacts.

I don't know where the other Scottish samples on the FTDNA tree trace their descent within Scotland because this isn't shown. It would help to know if they also come from the western seaboard or from further inland or to the east.

Since R-PH93 are from a part of Scotland that was speaking Gaelic it looks like the evidence tilts toward Gaels as the ancestors of R-A287, but this should be taken as not conclusive until more samples test or indicate a more specific origin within the British Isles.