First, the "White Gods" theory, summed up in my words:

That there was a pre-Viking Age migration of Europeans to the New World who integrated with indigenous people, became leaders and instructed them how to build pyramids, mummification, etc.

This is an old theory dating back to the conquistadors who heard legends of white-skinned gods that had arrived by ships in various South American cultures.

This post delves solely into Y-DNA evidence which would support or contradict such a theory and does not address any of the mitochondrial or autosomal DNA, archaeological or cultural arguments put forth in support of the theory*.

Let's use the same methodology that I use to compute the migration of every other haplogroup on PhyloGeographer:

A pre-Viking Age migration from Europe to the New World would be demonstrated by a subclade of I-L158 with TMRCA well over 1200 ybp, all of whose descendants live exclusively in the New World.

The higher the number of I-L158 subclades with pre-Viking Age TMRCAs that fit this, the more likely they migrated to the Americas before the Vikings. This is because the alternative explanation, that they were really all Viking or later-comers, becomes less likely as it would rely on multiple migrating founders from Europe, each of which was the last of a bottlenecked lineage which subsequently died out in Europe.

PhyloGeographer currently excludes New World samples due to a computation difficulty involving the International Date Line. So it cannot be used to answer the question currently.

It will be updated in first few months of 2019 to include all samples from the New World. I will update this article at that time with the results, if there are any pre-Viking Age subclades of I2 (or I1).

In the meantime, "Show me the Subclade", if one exists, that would support the "White God" theory as outlined above. You can look yourself at the I-L158 samples currently on the YFull tree.

If these Canadians' TMRCA were before the Viking Age, it would fit the bill, but their presence in Canada is explained by a more recent arrival.

These Puerto Ricans do not yet have a TMRCA estimate but it will end up being well post-Viking given the number of SNPs they share. 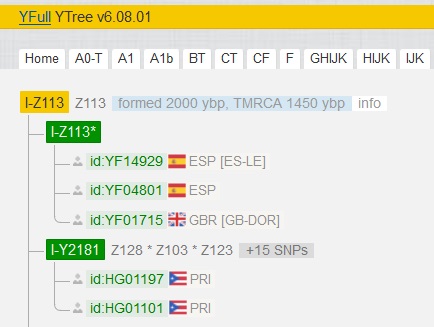 The only other samples with potential are YF12588 from Tennessee, HG01167 from Puerto Rico and HG01344 from Colombia. All are alone in their subclades on YFull, so if each was joined with enough exclusively New World samples, it is possible they could be a pre-Viking Age clade depending on number of SNPs.

AncestryDNA article, mentions an I2 lineage found in the Americas is likely from a post-Viking era migrant

I have not read these articles, about autosomal DNA, outside the scope of my Y-DNA analysis.