To attempt to theorize how the different lineages of J-Z600 may have migrated within Europe between 3400 and 2400 BC, we have a very limited number of modern and ancient samples to work with.

Given that sibling J-Z585 has two child lineages in Italy, one from Tuscany and one from Sardinia, it is possible and perhaps likely that J-YP157 migrated to Sardinia from Italy, possibly with the Central European Bell Beaker assemblage which is archaeologically attested to 2000 - 1800 BC in Sardinia [Ugas 2005, p. 12.], before the age of the ancient sample.

Note: No J-L283 has yet been found in Europe dating to the Bell Beaker time (1600 BC is the oldest) - this is why no J-L283 has been found in a Bell Beaker context. Whether the migration to Sardinia was sometime before or after the introduction of Bell Beakers, does not change the geography of the theoretical migration map. I'm not trying to appropriate the entire Bell Beaker phenomenon to my haplogroup, merely citing the possibility that it was the vector that is documented in the archaeological record that provides a known migration from a likely origin to the destination of this lineage confirmed by ancient DNA. J-L283 has not been found in Neolithic Europe so Bronze Age migrations are on the table. J-L283 appears, based on lack of diversity so far, to not have been in a dominant position anytime in Europe before 2400 BC (J-Z597 in Balkans in next section). Hopefully another sample in this group does a NGS test so that YFull can estimate when the MRCA of this Sardinian lineage lived, this would help the discussion.

It should be noted that another Sardinian lineage, child of J-Z585, known as J-YP113, could represent a much later, possibly post Roman, migration to Sardinia given that there are 37 SNPs in the bottleneck which started 2900 BC.

There is another sibling who is J-Z600* who traces descent to the Dominican Republic. It would be very interesting if more samples were to be found to suggest a deeper origin of J-Z600 in Iberia. But given the data at hand, Iberia seems like an outlier, especially given that Portugal is sampled 5 times higher per capita than other countries on YFull. The Tagus Estuary of Portugal is considered to have been the first center from which Maritime Bell Beaker spread. So if these men really originated in Iberia I think we'd have more samples to show it.

While J-L283 is sometimes oversimplified as a Balkan haplogroup, the Balkan diversity really only stretches back to J-Z597, whose most recent common ancestor lived 2400 BC. Within a few centuries the main subclade, J-Z2507, had diversified into dozens of lineages, most with some living Balkan descendants and also found in an ancient sample from Croatia dating to 1600 BC.

Let's examine the Bell Beaker archaeological horizon as a possible conduit of migration to the Balkans:

In its early phase, the Bell Beaker culture can be seen as the western contemporary of the Corded Ware culture of Central Europe. From about 2400 BC, however, the "Beaker folk" expanded eastwards, into the Corded Ware horizon. In parts of Central and Eastern Europe – as far east as Poland – a sequence occurs from Corded Ware to Bell Beaker. https://en.wikipedia.org/wiki/Bell_Beaker_culture

It is noteworthy that the eastward expansion of "Beaker folk" around 2400 BC corresponds to the most recent common ancestor of J-Z597, which based on modern diversity and ancient samples appears to have been established in the Balkans at that time. However the maps of Bell Beaker cultures in Europe that I have found do not go into the Balkans. The closest is this:

Another pulse had brought Bell Beaker to Csepel Island in Hungary by about 2500 BC. In the Carpathian Basin, the Bell Beaker culture came in contact with communities such as the Vučedol culture, which had evolved partly from the Yamnaya culture, so shared the same type of metallurgy practised by Bell Beaker metalworkers.

The Vučedol Culture corresponds well to the area where we now find many J-Z597, as well as I4331, the boy from Croatia dated to 1600 BC - SNP analysis by Flor Veseli.

So far no J-L283 was found in older Vučedol remains (nor anywhere else in the Balkans). Of the two men dating to before 2500 BC found in Croatian Vučedol territory, one was R1b and the other G2a.

Since the diversification of J-Z597 in the NW Balkans didn't happen until almost at the end of the Vučedol Culture, perhaps J-Z597 was the haplogroup of the successor culture. The article on wikipedia cites the culture as flourishing between 3000-2200 BC [Dating as in Ian Shaw, ed., A Dictionary of Archaeology, 2002, and elsewhere; dating methods are discussed in Aleksandar Durman and Bogomil Obelić,Radiocarbon dating of the Vučedol culture complex, 1989.].

Wikipedia lists the Nagyrev Culture, as a successor culture to Vučedol. Upon inspection this looks like it may simply be the only culture defined on Wikipedia that overlaps with any part of the Vučedol Culture.

I would be grateful to anyone who can provide information about the culture succeeding the Vučedol Culture in NW Balkans around 2400-2200 BC.

This is roughly contemporaneous to the beginning of the Unetice Culture, but in the NW Balkans rather than in Central Europe.

We now have two migrations that could plausibly tie the expansion of two J-Z600 lineages to the Central European Bell Beaker horizon.

To attempt to link these together, I have devised the following rough migration map starting from the putative J-L283 homeland of South Caucasus / South Caspian / W Iran. Consider all clade formation locations as extremely speculative aside from J-Z597 and J-YP157, which are somewhat less speculative. I look forward to having more information to work with so I may be able to revise this map to be less speculative.

I put J-Z600 somewhere between Northern Italy, Austria and Hungary to minimize distances to the two later Bell Beaker associated migrations. If this is correct then it implies that J-Z600 had migrated to Central Europe, possibly via the Danube, around 3400 BC. 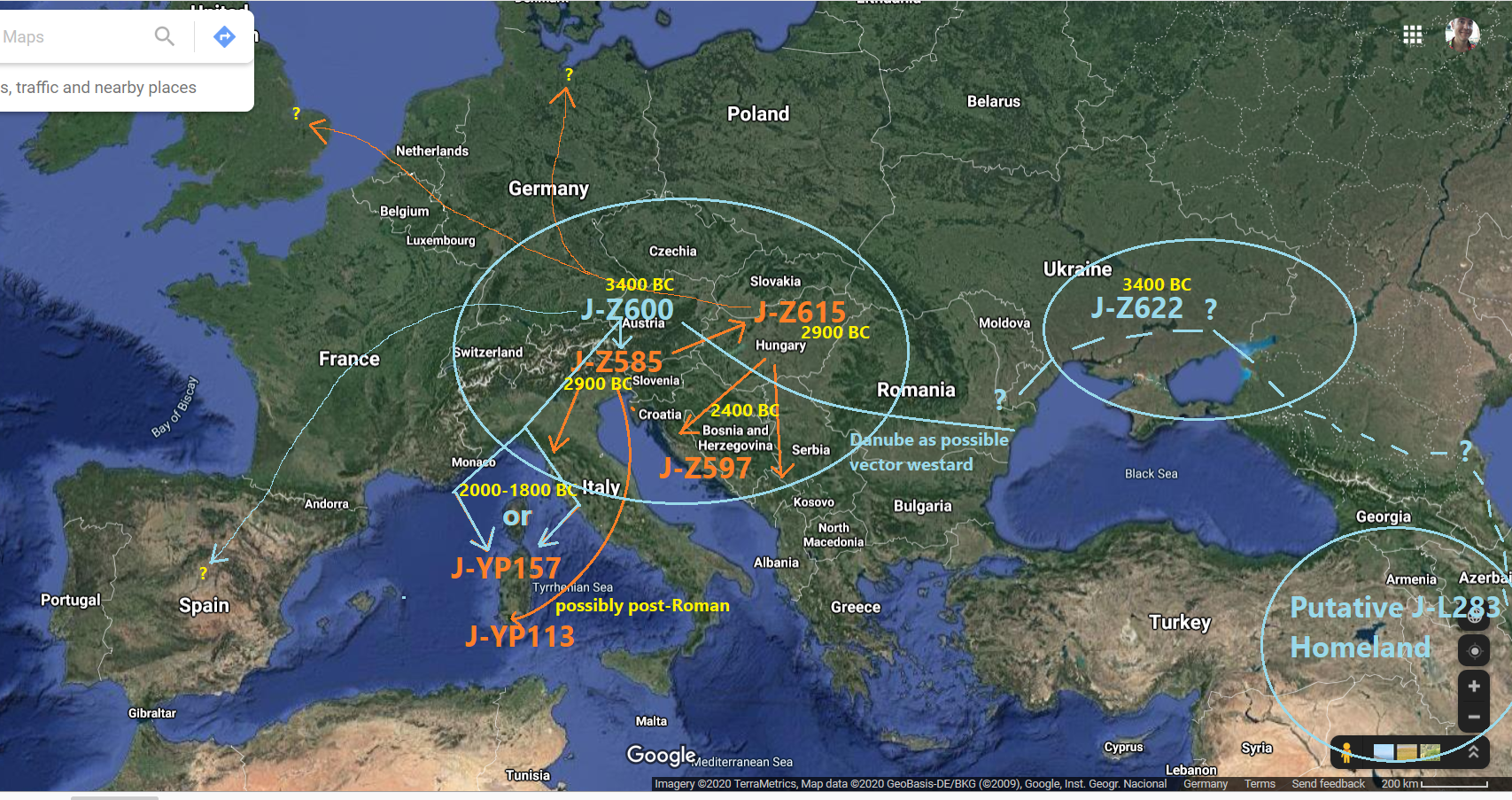 To keep things simpler I've left J-Z600's sibling, J-YP91 off the map. I think we need more tests to begin to understand its history, but its Polish, Ukrainian and Russian diversity has the potential to provide an the Eastern European bridge between Armenian J-L283* and Central / South European J-Z600.

The J-L283 Research Fund's priority is to test these people to help us understand what the likely migration route was. Consider donating to the fund if you wish to advance this research.

Looking at this map, it would not be possible to get to Central Europe from the east in 3400 BC without passing through the Baden Culture's archaeological horizon. In this study of ancient samples buried in Baden Culture or Proto-Boleraz (another LBA culture of Hungary) context, six were G2a and five were I2, one was I [https://www.ncbi.nlm.nih.gov/pmc/articles/PMC5973800/].

Perhaps some J-Z600 became integrated within this culture around 3400 BC, though not in large numbers or in the elites, otherwise there would be more child lineages today. In 2900 BC some of the lineages became integrated into Bell Beaker cultures in Italy and Central Europe.

Only in 2400 BC does one lineage of J-Z600 become very prolific, namely J-Z585>Z615>Z597. This man and his sons established dozens of successive lineages within a few hundred years in the NW Balkans. This could be indicative of a combination of these men having held elite status in society or favorable economic conditions. Though I believe you can have such proliferation simply by having the elite status without favorable economic conditions.

The day after writing this post I noticed something interesting by glancing at the YFull tree and seeing the TMRCA of the possibly basal J-Y15058 from Sardinia.

If the migration of J-YP157 was in fact Bell Beaker mediated and happened 2000-1800 BC, this roughly matches the TMRCAs of J-Y15058 and J-Y21045 (though YP9 may be a bit later given the additional SNPs, there is no YFull estimate), both children of potentially Balkan origin J-Z597>Z2507. So it's possible that all three lineages became established in Sardinia during the same time, possibly by men who migrated there together.

The MRCA of these men lived 3400 BC, so the men of J-Z2507 lineages would have been about 1500 years distantly related to the J-YP157 men at the time of the migration.

Given that there are only a few SNPs in the J-YP157 bottleneck, it's possible that this lineage actually became established in Sardinia by one man earlier - or that it was founded by two comigrating yet related men itself. If another Sardinian from J-YP157 gets on the YFull tree then we'll have a MRCA for this lineage which will help us understand more.

If all three of these lineages didn't comigrate to Sardinia together, there is still the possibility that the two J-Z2507 lineages did - their being more closely related. Their MRCA would have lived just 500-700 years before their potential comigration to Sardinia.