All N-Y5003 descend from a man who lived 0 AD, likely in Finland. He sired 13 lineages on YFull, three of which are basal samples.

One lineage, Y24502, sired two exclusively British lineages in 969 AD (YFull estimate). One lineage is represented by a single man from The Scottish Borders, the other from men from West Yorkshire (Calderdale and Kirklees).

While searching for North Baltic links to England, I found this from Wikipedia "History of Yorkshire":

"The Swedish Munsö dynasty became overlords of Jorvik because the Danes in Britain had promised loyalty to the Munsö Kings of Dublin, but this dynasty was focused on the Baltic Sea economy and quarrelled with the native Danish Jelling dynasty (which originated in the Danelaw with Guthrum)."

Interestingly, the House of Munsö is also called the House of Björn Ironside, while the earliest historically attested member of this house is Eric the Victorious.

The origin of this house is in Ekerö, Sweden, close enough to the computed origin of Y5003 to be a potential vector of migration to England.

If closer relatives to Y24502 are ever found in the North Baltic it would shed further light on their migration.

Two other points of interest within N-Y5003:

YF08527 of Westminster is basal for Y5003. While he may have also taken part in the same expedition as Y24502 he does not descend from this lineage, so his migration could be completely different.

BY6007 in Lipetskaya Oblast. This lineage has Russian roots since a common ancestor who lived about 519 AD. How did they get there from Finland?

There is also a Y15159* outlier in Tula, Russia who separated from his Finnish-Estonian siblings around 69 AD. Tula is next to Lipetsk... Why are the only two Russian samples below N-Y5003 in these places? 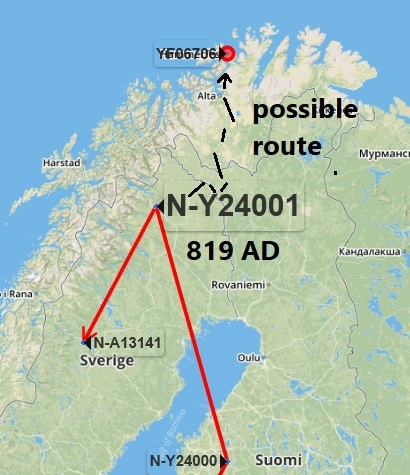 YF06706 of Troms, Norway is Y24001*. He has a common ancestor with men of Västerbotten County, Sweden who lived around 819 AD. Since their roots are likely from Finland before that, the simplest explanation is that this modern Norwegian descends from men who migrated first to Västerbotten/Norrbotten and then continued overland to Troms through mountain valleys.

I'm not knowledgeable enough on the history of Saami vs Norse in this region to speculate on the cultural identities of these and other N-Y5003 men. Especially due to the large degree of cross-Baltic mixing, at least evidenced by Y lineages of N found on both sides.

So I invite those knowledgeable on these matters or members of these lineages themselves to contribute to the discussion.