We are fortunate that, in determining the birth place of Y15058, we have an ancient sample that lived close to its MRCA and that also matches the modern diversity in the Balkans. I4331 was a 5-7 year old boy who died about 3591 years ago and was discovered in a burial mound in Vrgorac in Split-Dalmatia County, in southern Croatia.

So because he lived only about 300 years after the common ancestor of J-Y15058 there is a good chance that the origin of J-Y15058 itself is not far away. Especially because this boy was also negative for Z40053 and J-Z38241 which appear to have ranged far within a short time. 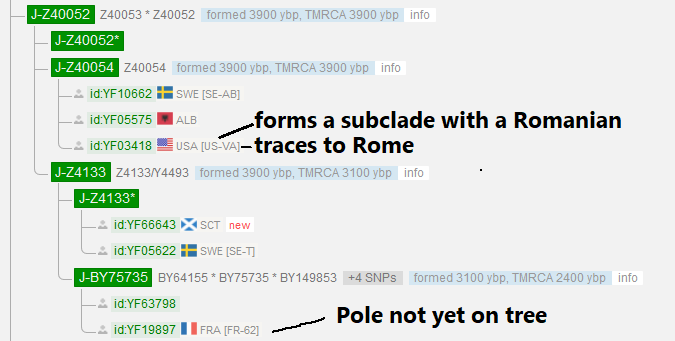 Both sibling branches below J-Z40052, whose most recent common ancestor lived 1900 BC have modern descendants in Sweden, living only 56km walk distant from one another.

Because of the circumstantial evidence linking this lineage to a Balkan origin, I see the Swedish presence of both branches as the result of a migrating kin group undertaken by either of these simplified interpretations (for there could be several generations between successive SNPs):

The latest date such a migration would have taken place would have had to have been 1100 BC because this is when the MRCA of J-Z4133, which seems to have a Swedish origin, lived. If a Swedish origin seems like a stretch, now look at the distribution of the Scottish cluster of J-Z4133*.

I propose a Scandinavian Viking link to the Scottish Z4133* cluster given that Swedes are found in both Z4133 and Z40054 and given that the areas of Scotland where these men live were part of the  were conquered by Viking Kingdom of the Isles. The more remote of these areas, the Hebrides, has one of the highest concentrations of Scots Gaelic speakers with over 50% conversant. This is a remote place and this makes it more likely that a possible Viking link, if the dates match, is a more plausible theory than another.

Only one man has done NGS so we don't yet have a YFull estimate for this cluster's TRMCA. While Z4133 itself has MRCA who lived 1100 BC, the absolute genetic distance between the men in the Scottish cluster range from 9-15/67, making a Viking era MRCA possible. Additionally, another man sharing some of these cluster's STRs traces descent to Sweden in general.

I leave it to historians to discuss the likelihood of Swedish Vikings rather than Norwegians as having undertaken such a migration to the Hebrides. Vikings frequently entered military alliances with rulers from different areas. I think given the rest of the circumstantial evidence it's not much of a stretch to assume either this, or that our ancestral Swede became a Norwegian by the Viking Age.

Another link to Sweden is manifested by a Polish Z4133>BY75735. He traces descent to Szczytno, which is a 140km walk to the medieval port city of Truso, an important stop along the Amber Road connecting the Baltic coast of Poland to Gotland, Sweden.

The second confirmed BY75735 traces descent to Cormont, France, an area raided by Vikings and not far from their colony of Normandy.

How does such a 1900-1100 BC migration to Scandinavia fit the archaeological record?

Unfortunately it doesn't exactly fit with a known major migration. The Corded Ware horizon which is a good candidate for bringing an Indo-European lineage from the Balkans to Scandinavia is considered to have lasted from 2900 - 2350 BC.

The Bell Beakers are attributed with having established long range trade networks but most maps I find don't consider Scandinavia as within this phenomenon. I do remember reading about wrist guards and flint arrow heads being found in Denmark, however, which are hallmarks of Bell Beaker culture.

The Nordic Bronze Age begins, according to Wikipedia, 1700 BC so this fits.

So I think we can look at this migration as economic, perhaps related to the Amber Road possibly coinciding with the beginning of a period of greater stability and wealth in the Nordic Bronze Age.

There are many in forums who reject out of hand that a J2 subclade may have migrated to NW Europe before the Romans. It is true that no pre-Roman ancient samples north of the Alps have been found.

One should consider what they think the likelihood is that, given the small number of J-L283 ancient samples that have been found whatsoever, that none have yet been found in a region when they would have constituted an even smaller minority of the population.
The men who brought J-L283 to Sweden may have been as few as 4 men. Two men brought J-Z40052, one/two may have brought J-Y23094, one may have brought J-Y82184.

"The climate [Scandinavia] was comparable to that of present-day central Germany and northern France and permitted a fairly dense population and good opportunities for farming" - Nordic Bronze Age, Wikipedia

This warm climate persisted until around 850 BC and would have likely supported a higher population than during the Viking Age. So we're really looking for needles in haystacks to find an ancient J-M241 sample in the Nordic Bronze Age, even if they were really there.

It should also be noted that there is a precedent for mass migrations of Southern Europeans to Northern Europe in the Late Bronze Age 1200 BC in the Tollense River Battle. To my knowledge Y haplogroup information has not yet been released from this study but it will be interesting.

An interesting possibility, that can be better considered once we have better resolution on the origin of J-Y23094, is whether it is possible that Y23094* and Y23094>Y36192 comigrated to Sweden with their J-Z40054 and J-Z4133 distant cousins. The MRCA of Y23094 lived 1600 BC and was likely also living in Southern Europe. So if this was a single comigration it would have had to have occurred between 1600-1100 BC. I'll revisit this theory after J-Y23094 resolves further and after having added comigration discovery to PhyloGeographer.