J-M205 has greatest diversity in the Near East and the most ancient samples have been found in the Levant.

As South Arabia does not seem the likely origin of J-M205, lineages that trace descent to there must have migrated after the most recent common ancestor (MRCA) of J-M205 lived, 3700 BC. 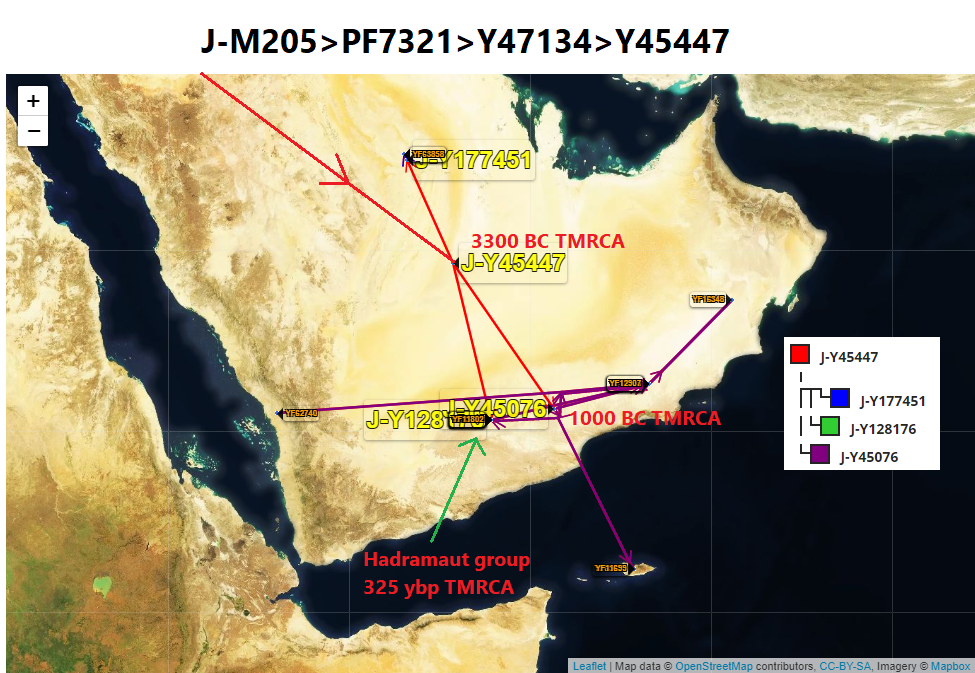 Interestingly, all three men in child lineage J-Y177451 (on YFull) with MRCA 1500 BC trace descent to Riyadh. This on its own leads to the plausibility that the ancestor had migrated to Riyadh by 1500 BC, though a somewhat later comigration cannot be ruled out.

The two other children lineages of J-Y45447 are restricted to South Arabia.

This lineage is restricted to Hadramaut, Yemen though the MRCA lived just 325 years ago. So this branch on its own is not strong evidence that the ancestor had been living in South Arabia for thousands of years.

This lineage underwent a series of diversification events starting 1000 BC in the historical area of South Arabia, encompassing Yemen, Socotra, Dhofar (Oman), and Jizan (Saudi).

The Soqotris' closest relatives are Yemenis from Hadramaut and their MRCA lived 700 BC. The MRCA of the two Soqotris on YFull lived 620 AD. So their ancestors migration to Socotra, based on the DNA information alone, would have taken place sometime between 700 BC and 620 AD.

According to the below map from this study, speakers of proto-Modern-South-Arabian (F) split from proto-Ethiopian-Semitic (G) somewhere between the Levant and NW Arabia before proceeding to South Arabia and the Horn of Africa.

The yellow shade in the diagram shows that Modern South Arabian speakers are believed to have been living in South Arabia by 1000 BC. From the analysis of the MRCA dates and sample distribution above, it's clear that J-Y45447 was also living there by that time, and perhaps even as early as 3300 BC, given that two out of the three lineages which split at that time are found in South Arabia.

Interestingly, the date that this study picks for the origin of Semitic languages is 5750 ybp. YFull v8.02 computes J-M205 as having a MRCA of 5700 ybp.

The closest genetic cousins of South Arabian J-Y45447 is an Egyptian from Faiyum. His MRCA with J-Y45447 lived 3300 BC. It seems plausible that their common ancestor may have lived near the "E" on the above map. With just a single sample from Egypt so far it's not possible to tell how long this man's ancestors had been living in Egypt. In this article I go into more detail regarding an influx of Near Eastern cultural and technological innovations into Predynastic Egypt.

It seems plausible to me that they did bring the languages with them because they appear to have entered South Arabia from the direction by which the Modern South Arabian languages are expected to have spread, based on the circumstantial evidence analyzed above, by 3300-1000 BC. They also split with their siblings at the same time that Semitic languages are believed to have split according to Kitchen et alii 2009.

If a related lineage is ever found in the Horn of Africa and if the MRCA corresponds to the split between Ethiopian Semitic languages ("Ethiosemitic" in figure above) and Modern South Arabian languages, this would make more plausible the theory that these lineages introduced the respective South Semitic language groups into their regions. This is estimated at 2650 BC from Kitchen et alii 2009.

Note: If the estimates from this study are correct, all Modern South Arabian languages descend from one proto language that began to diversify 3050-2050 years ago. It looks like the numbers from this study only barely match the end of the range of J-Y45447 having entered between 3300-1000 BC.

Another interesting note: The study computed a closer relationship between Socotri and Jibbali. However our Socotris' closest relatives are those tracing descent to Hadramaut.