With the latest update to version 3 of the PhyloGeographer algorithm, migration paths are now computed to the New World for selected haplogroups within C and Q (C-1373, Q-Z780, Q-M3, Q-F746).

Some paths will now cross the International Date Line which lies in the middle of the Pacific Ocean. This is determined by the algorithm which now uses great-circle distance and only averages latitudes and longitudes after first applying an offset to avoid undesirable behavior caused by -180° being equivalent to 180°.

For example, without applying any offset, 178° and -176° would average to 1°. This is clearly not a good estimator for the center of these two points. By application of an offset the center is calculated at -179°, which is just 3° distant from each.

How did Q turn out? 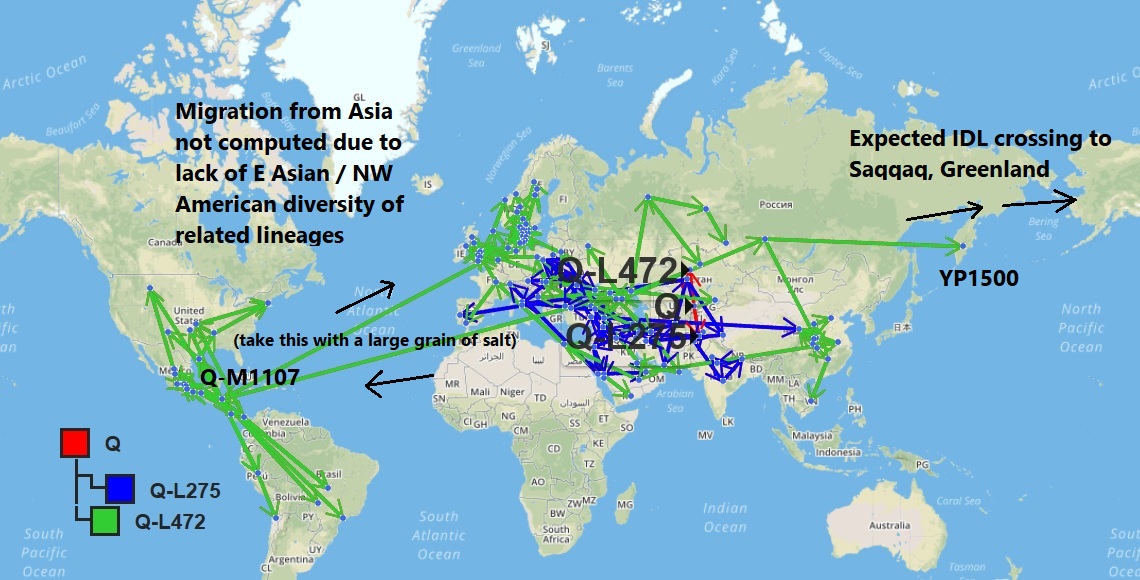 A migration to the New World via Asia was computed for YP1500 sample Saqqaq, but not for Q-M1107.

The algorithm computed the path of YP1500 from Kamchatka eastward to Greenland as expected. However, the shortest great-circle path between YFull samples of M1107 and L330 crosses the Atlantic rather than the Pacific.

This should change if/when more L330 is found in North East Asia, some M1107>M930>L804 is found in Eurasia (presently only Scandinavia/England) and more early M930 diversity is found in NW America.

Each of these lineages is diverse enough to warrant its own article. Once we have more data and the algorithm is more robust I will revisit. In the meantime any comments are welcome on this thread.

M1107 being computed to Central America could be accurate or the result of the extinction of other NW American M1107 lineages.

As always take any computed path with a grain of salt, especially these which are computed on samples which have diverged thousands of years ago and crossed great distances.

The PhyloGeographer algorithm is a work in progress and now open source. Suggestions for improvements are welcome.