The common ancestor of J-Y12000 (a branch under J-M241) is estimated to have lived around 1250 years ago, which was 769 AD. The overwhelming majority of the living descendants trace descent to Mishar Tatars and Moksha who lived in Mordovia and the neighboring oblasts of Russia.

Interestingly, Y12000 has not been found in Erzya speakers (the other Mordvinic language) or in Kazan Tatar speakers (the other Tatar language). If it were found in multiple branches of the same language group, one could assume that the Y12000 ancestor may have been affiliated with that group. Instead, there is no diversity of Y12000 within Turkic or Uralic groups. This suggests that Y12000 only relatively recently became affiliated with these groups and did not take part in the more ancient migrations which spread these languages.

I think it is telling that the most recent common ancestor of all the exclusively Tatar lineages lived between 650-750 years ago. This is the time when the Golden Horde established the Mukhsha Ulus in the territory of modern Mordovia, Penza and Tambov oblasts.

There are various theories about the ethnogenesis of the Mishar Tatars, but one of them is that they descend from Tatarized Mokshas who adopted the Tatar language and Sunni Muslim religion of their rulers. For this theory Wikipedia cites M. Z. Zekiyev "Mişerler, Başkurtlar ve dilleri / Mishers, Bashkirs and their language".

Because there are Moksha in three successive basal branches Y12000, Y12936 and Y12400, it is reasonable to assume that the most recent common ancestor may have been of the Moksha culture. But because the Y12000 common ancestor lived about the same time as the arrival of the Bulgars who were dominant, he may have in fact been a Volga Bulgar who had some sons with Moksha women who were then raised Moksha.

The Bulgar connection explains the lack of deeper Mordvinic roots in the Erzya and provides a viable corridor from the Pontic Caspian Steppe, more accessible from where Y12000's Central European ancestor Y12007 lived in 500 BC.

A Tatar researcher named Irek Bikkinin informed me that he believes that Burtas were the main ancestors of Mishar Tatars. I could not find any reliable information online about the Burtas but he told me that when the Volga Bulgars invaded, they displaced the Burtas who then moved to Mordovia. Later when the Golden Horde arrived the Burtas allied with them to defeat the Bulgars and supposedly integrated with the Tatars, themselves being a Kipchak Turkic group.

I hope anyone who is reading that can provide links to research about the Burtas will do so in the comments.

Migration to the East

Y12000 has 5 brother lineages which descend from a man who lived 500 BC. One traces his descent to Yorkshire, one to Bavaria, two to Czechia and one is mixed Chechen-English. Aside from the Chechen, which is a new find and an extreme outlier, the roots of Y12000 appear to be Bavaria or Czechia, which is also a central location to the next closest related groups.

Somehow Y12000 migrated from Central Europe in 500 BC to Mordovia by 769 AD. This predates the Russians and Mongol Invasions by over 500 years but is about the time of the migration of the Bulgars to the region.

"They reached Idel-Ural in the eighth century, where they became the dominant population at the end of the 9th century, uniting other tribes of different origin which lived in the area." - (in Tatar) "Болгарлар". Tatar Encyclopaedia. Kazan: The Republic of Tatarstan Academy of Sciences. Institution of the Tatar Encyclopaedia. 2002. 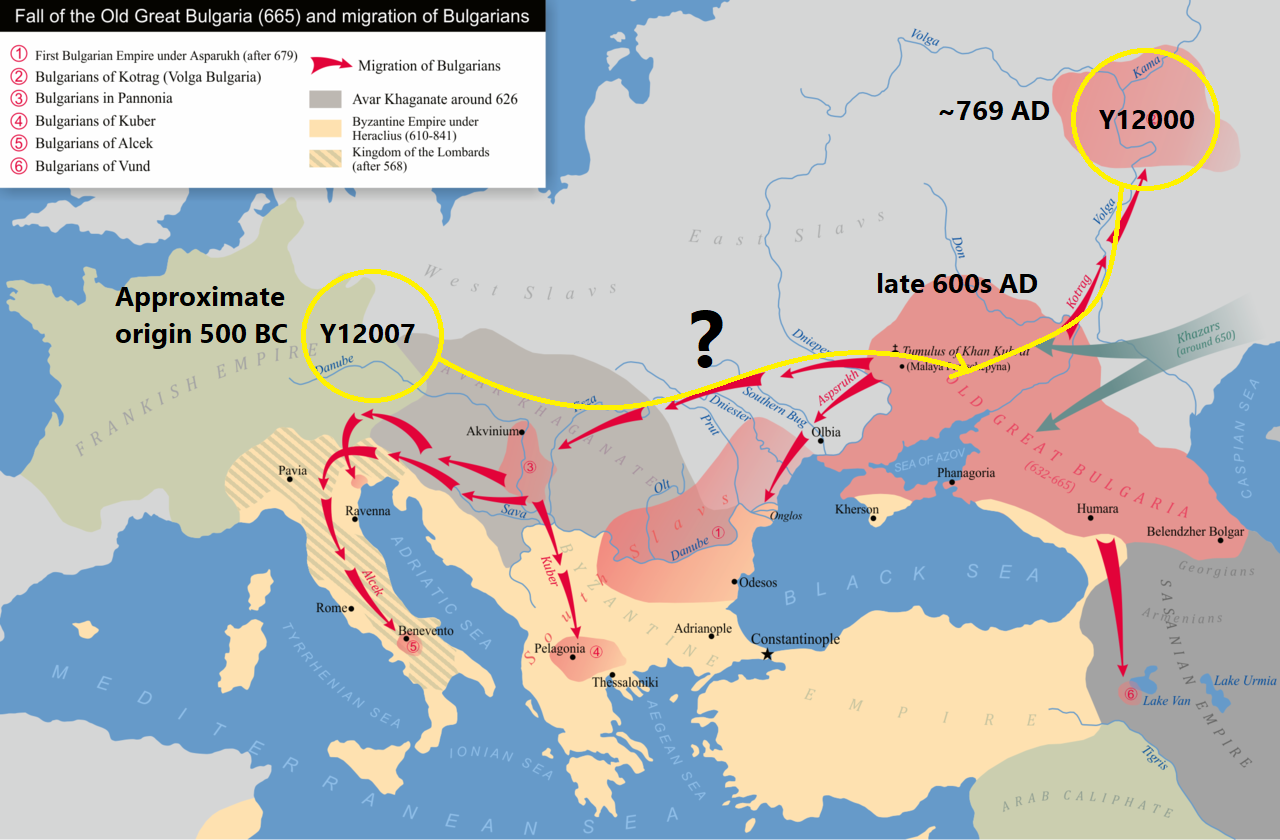 The big question mark refers to the migration during the period of time between 500 BC and the fall of Old Great Bulgaria 665 AD. This represents the genetic bottleneck during which only one son survived from each generation until they appear in Mordovia having accumulated 9 SNPs.

If Y12007 living 500 BC were Celts, some or all of the migration to the Pontic Steppe may have taken place during the Celticization of Western Ukraine.

"From the beginning of the 3rd century BC the territory of modern Ukraine, previously defined by the Scythians of the North Pontic steppes and Hellenistic influences from the Black Sea zone, was supplemented by the Celtic culture from the west. The influence of the latter in western Ukraine is testified to by extensive archaeological evidence which indicates the classic pattern of Celtic migration/settlement…." -https://balkancelts.wordpress.com/tag/celts-ukraine/

Another vector to the east emerged later with the arrival of the Avars in the Pannonian Plain. The Avars, with Slavic allies, later defeated Old Great Bulgaria. Below quotes from Wikipedia Pannonian Avars.

"Avars re-settled captives from the peripheries of their empire to more central regions."

"The Avar army was composed from numerous other groups: Slavic, Gepidic and Bulgar military units. There also appeared to have existed semi-independent "client" (predominantly Slavic) tribes which served strategic roles, such as engaging in diversionary attacks and guarding the Avars' western borders abutting the Frankish Empire. "

"[T]here appears in the seventh century a mixed Slavic-Avar material culture, interpreted as peaceful and harmonious relationships between Avar warriors and Slavic peasants. It is thought possible that at least some of the leaders of the Slavic tribes could have become part of the Avar aristocracy". Apart from the assimilated Gepids, a few graves of west Germanic (Carolingian) peoples have been found in the Avar lands. They perhaps served as mercenaries."

Until relatives are found that split the Y12007 bottleneck, there is not enough information to favor one of these theories over the multitude of possible explanations.

Aftermath of the Mongol Invasions

"According to some historians, over 80% of the country's population was killed during the [Mongol] invasion. The remaining population mostly relocated to the northern areas (territories of modern Chuvashia and Tatarstan)." - Wikipedia Volga Bulgaria

While there are no citations in the above quote, I will mention that there are Y12000 in both Chuvashia and Tatarstan.

So in summary, I believe that the Y12000 living today may be the offspring of a Volga Bulgar or Burta who later became Mokshas and Mishar Tatars (and maybe Bashkir and Chuvash as there are two samples from these oblasts).

If a distant relative is ever found in East Slavic populations, we should perhaps rather assume that Y12000 was originally an Eastern Slav. Though since no Y12007 has been found in Scandinavia, it would have been an East Slav of non Varangian Rus paternal origin.

"By the 9th century, groups of Varangian Rus', developing a powerful warrior-merchant system, began probing south down the waterways controlled by the Khazars and their protectorate, the Volga Bulgarians, partially in pursuit of the Arab silver that flowed north for hoarding through the Khazarian-Volga Bulgarian trading zones, partially to trade in furs and ironwork." - Khazars

I didn't consider that Khazars as a possible origin because this haplogroup is only found in a very small area of the Khazar empire which stretched from Kiev to the Caucasus. A surviving enclave of Volga Bulgarians who were defeated elsewhere seems a better explanation.

It is worth mentioning that several of the Mishar Tatars in this group have paper trail genealogies tracing back to Prince Yanglych. The relationship to Prince Yanglych is confirmed by DNA because so many of the derived surnames are also Y12000 positive.

In the tsar charter of 1580 Prince Yanglych was named the Prince of Mordvins of Kadom and Styaldem.

However a genetic link to the Tatars who would have arrived in the 1300s is not supported by the existence of three Y12000 lineages with most recent common ancestor who lived approximately 769 AD in Mordovia/Penza. The interpretation that these three lineages would have been introduced by co-migrating Tatars out of Central Asia that stayed with each other for 400-500 years before arriving together in Mordvinia, not having sired any other lineages along the way is not the simplest explanation.

For this reason I think Y12000 arrived in Mordovia before the ethnogenesis of the Mishar Tatars.