The following predicted phylogeny is one result of a recent STR analysis of men who are DYS385a=10 in J-L283, and on this basis presumed positive for J-Z1043>FGC55778. The samples are from public J-M241 and J2 projects on FTDNA and YSEQ.

I predict that members of a Swiss-German-French cluster with surnames Zehr/Zaher/Sears and those of a Sicilian cluster are each others closest relatives because no one else in J-FGC55778 has the allele DYS389i=13, and they also share similar rare DYS449 and DYS439. These two clusters represent the left side of a speculative larger grouping I also found.

One member of the Zehr/Zaher/Sears cluster I've been in touch with has provided me an origin as Switzerland but two other samples I have found list Germany and France as country of origin.  It isn't clear how long the Sicilian group's ancestor had been living in Sicily but could be well over 1000 years based on GD 7/67 between two of the three Sicilians in this group who have a shared mutation (along with surnames similar to Ferreri) not shared by the third Sicilian.

Once any of Zehr/Zaher/Sears group does a NGS test, the YFull analysis will provide an estimate of when their common ancestor with the Sicilians lived. This will advance research into the origins of J-Z1043>FGC55778. 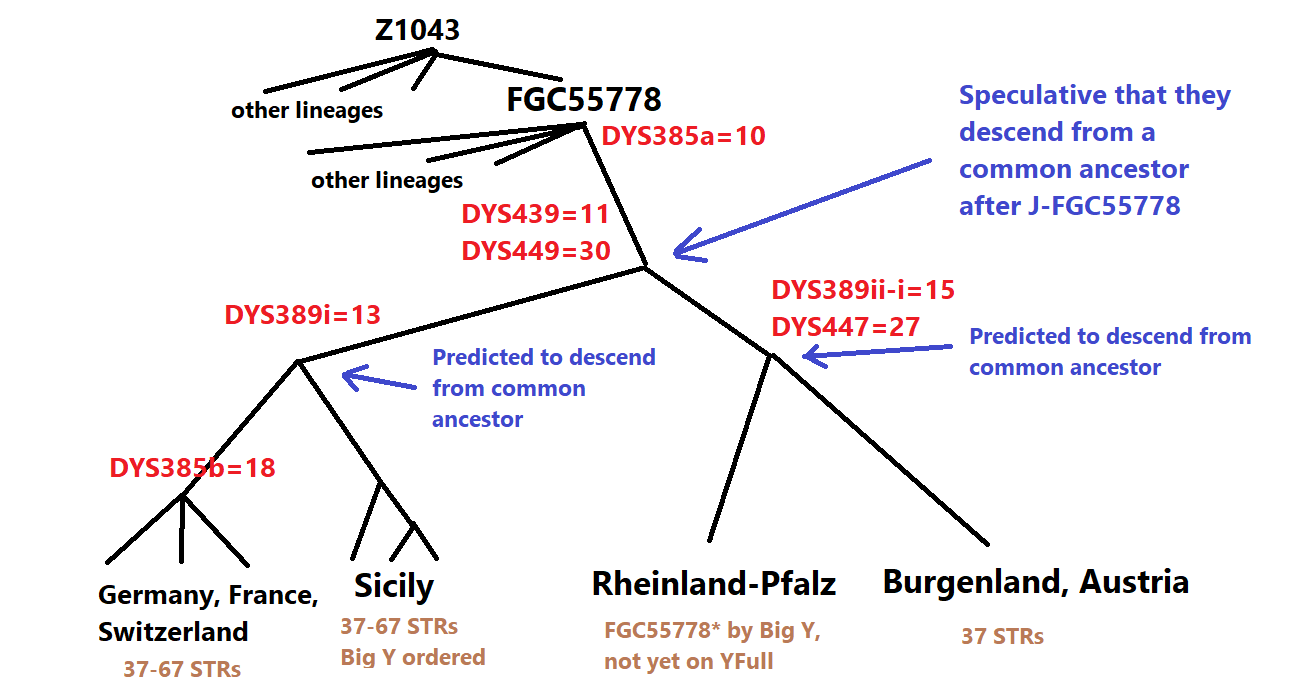 On the right side of the diagram is a predicted branch defined by two men sharing two alleles. One man is from Pamhagen, Austria, near the border with Hungary. The other man traces descent to Sankt Goar in Rheinland-Pfalz.

The DYS389ii-i=15 they share is a very rare mutation among confirmed/presumptive J-FGC55778. The only other men with this in J-FGC55778 are a German branch of J-Y98609 who have very divergent DYS439 and DYS449 alleles. The NGS result of the man from Rheinland-Pfalz as FGC55778* definitively rules out a connection to this lineage.

I think each of these predicted groupings are on solid ground based on the rare STR alleles shared. Somewhat more speculative is whether or not the shared alleles DYS439=11 and DYS449=30. These alleles are found in other men in the project and have a higher mutation rate. We will soon know whether or not the men on each side of the tree do share more recent common descent with each other, as a member of the Sicilian group has recently ordered Big Y.

There are many other men in presumptive J-FGC55778 who are still not reliably predicted to belong to any known subclade.

This SNP has recently been tested for the first time at YSEQ, since being discovered by the FTDNA Haplotree.

It was last week confirmed in a man with surname Manfreda, part of a clan that trace descent to Tolmin, Slovenia, and have a theory that their ancestor may have migrated to there from Italy sometime before 1507, the date a document refers to their ancestor living in a village called Kanalski Lom. Some people living there have surname Manfredi.

I cannot clearly predict which men in J-FGC55778 they are most closely related to. The J-Z1043 Research Fund will be used to help fund their NGS test because they cannot afford it, come from an underrepresented region and look very distant from all other lineages in J-FGC55778.

If you are J-Z1043 and value this research, you may donate to the fund to advance research into our common origins.