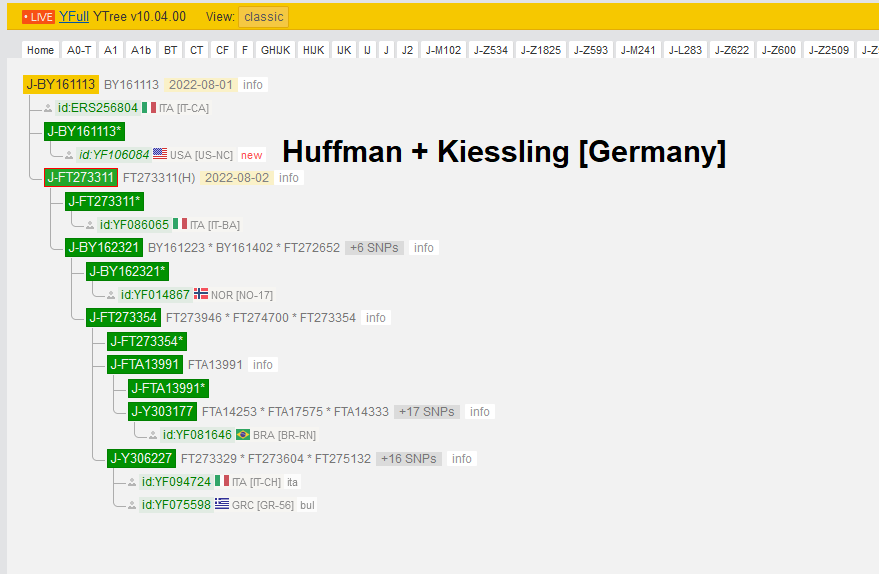 The YFull estimate for when his common ancestor with the rest of these men lived appears likely to fall within 3800-4300 years ago, based on current estimates for J2b-BY161113.

This Huffman descendant has a reliable GD 3/67 STR match to a man tracing descent to a Kiessling who did not answer our outreach. This match's first name was German so it would appear that this man himself lives in Germany (or Switzerland or Austria).

So most likely this line does come from Germany or Switzerland or Austria, given that the reliable GD 3/67 Kiessling match appears to have remained nearer to their ancestral homeland.

I have made contact with another Kiessling in an attempt to find the precise geographic origin of Huffman's Kiessling relatives. We are waiting for the result of a SNP test to confirm relatedness.

Kiessling/Kießling is a very common surname in Saxony, Thuringia and Bavaria. One in 253 men have the Kießling variant in Saxony.

The derivation is topological, meaning someone from a gravelly area and so likely has several independent genetic male lines. Testing a single random Kiessling is probably not likely to result in a male line genetic match but we try anyway because it's low risk ($18) and high reward.

There is one more lead we have on this line.

Our Huffman descendant has a single exact 12 STR match to a man tracing descent to a Jacob Berrens who died in Kirchweiler, Rheinland-Pfalz in 1857. This match had only tested 12 markers.

This doesn't mean that Berrens is definitely going to end up positive for the same rare line J2b-BY161113. Though this is a possibility.

To put the exact 12 marker match in perpective, there are a half dozen other men from different J2b-L283 lines who differ from their signature by just one marker.

Last week I've ordered a SNP test at YSEQ for the Berrens descendant in order to determine which lineage he is and hoping he may be positive for this new, rare Huffman-Kiessling line.